I have to kind of review myself after some more testing of skins from the NOT FOUND brand. I tested the Genus head with some skins from Not Found. I wrote about that in Gung Ho over a makeover and was quite enthusiastic about the skins at that moment, despite in the end sticking to my present look.  At the moment of testing I only used 2 skins. Because still a bit curious about the Not Found skins I decided to test more demo’s. Looking at the commercial posters for each demo I already saw there was really hardly any change between the several skins. A commercial/ applier picture can LOOK different due to other eyes and skin colour, hair and by using a more or less close-up for a head shot. Change a bit the use of light and shine on a skin also can make it look more different than it really is.

I decided to do a test with one of the latest releases with a previous release. I tested the new release ANNE with an older release called DIANA. To be absolutely sure I used the shape and eyebrows of their own demo appliers  on both skins. The shape in each applier differs a little bit, but even when I use the slightly different shape on the other applier the similarity between the two skins is in fact as if you look at a twin sister. And the shape should not make the difference here anyway, the skin should, as skin maker. The only difference is a different lighting on ANNE and less red lips. The rest is for me exactly the same. The price for each skin is 875 Linden. I call such a way of marketing/ creating/ selling a scam. It is betrayal and easy money making. NOT FAIR would be a better name.

For the ANNE skin I used the demo applier and only erased the white DEMO words on it, not the white lines. You cannot escape the resemblance. I would be a fool to buy Anne when I already have Diana. 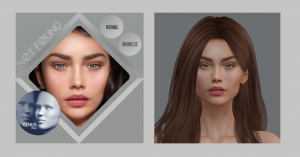 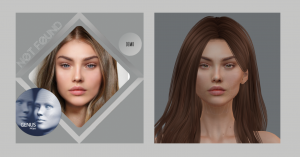 I like the quality of the skins and the natural looks. Many brands create Barbie, Vamp or Child Face looks I really absolutely find boring and stereotype. For someone with skills to make it look more natural I am disappointed in how it results in overall the same looks. I checked the Flickr page and see the same kind of faces everywhere, only some exceptions there. I hope the creator reads this and shows a bit more variation in skins and less twin looks for each time 875 per applier. Everyone knows many looks in Second Life are the same since mesh heads took over. Mesh head designers are meant to make different shapes, skin designers are meant to make different skins. But many use the same basics over and over again, mesh head designers AND skin designers. Hence why many avatars look the same. Sometimes I miss the old default  . . .  maybe less perfect, but more different for sure.

I know many skin makers have their own style. But a style can have more variation. I also know Not Found is not the only one doing this. But because I was into it lately I took this as example for how we are asked to pay for looking the same way as someone who paid for another skin of the same creator