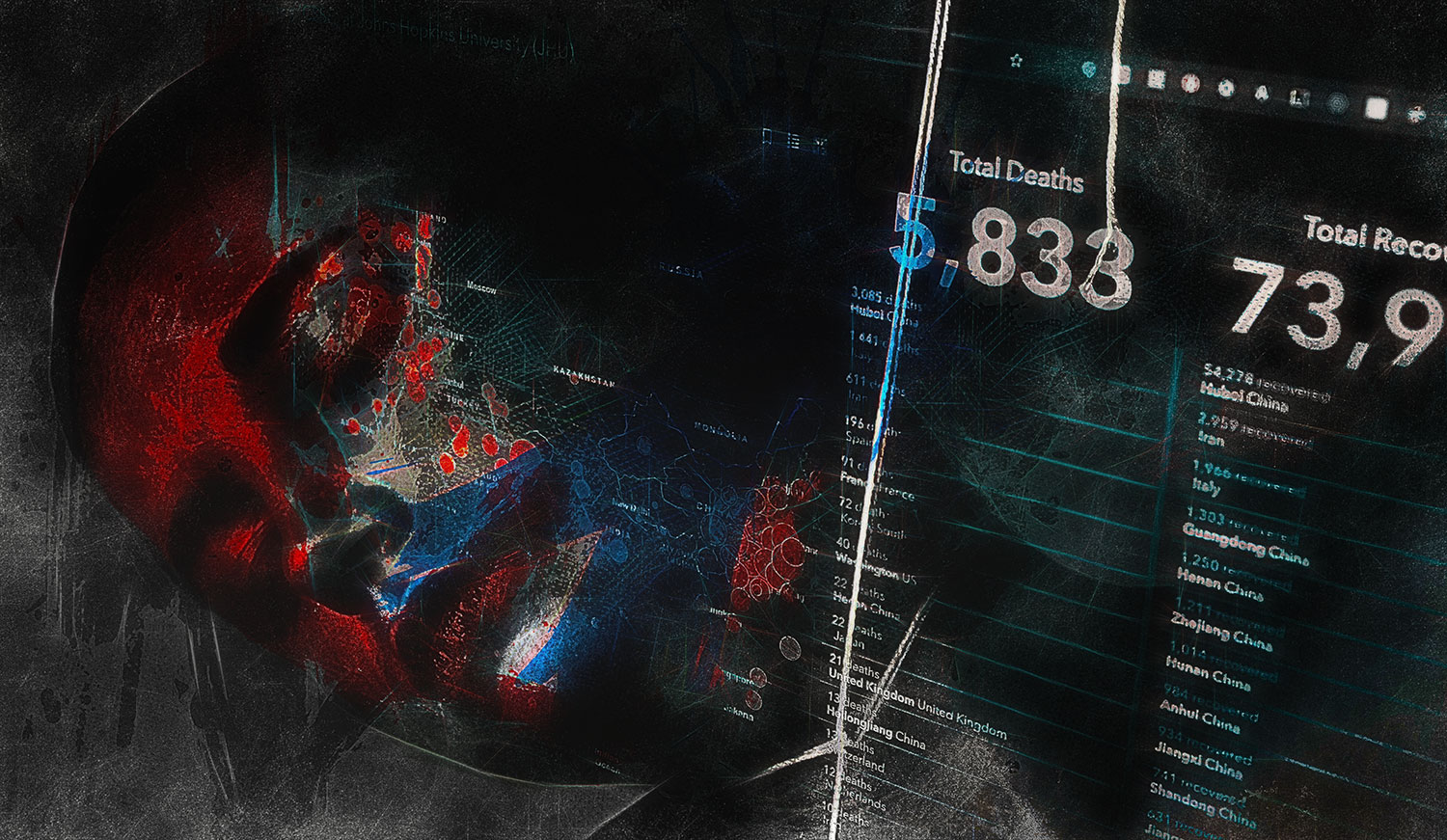 There is no escape anymore for anyone. Corona is our new stalker. A dangerous one that only can be stopped by the act of social distancing world wide as much as possible. I admit to never have expected this a few weeks ago. I remember how I looked at it when it still was in China only. Relaxed and nothing big to worry about. One of those things that occurred far away and would be solved far away. When I made the short footage with Dr. Nax about Corona I already was more aware of it becoming a serious issue. And now, just a few days after that, many countries, including mine, look like being in a disaster movie we never could have imagined to once really happen to us. I am not scared, but do notice it influences my way of feeling and thinking. More emotional (not sentimental), more caring, more aware of others needing help, more careful and willing to let go of things if needed. We seem to become more social when we are asked to be less social. Strange huh . . .  Yeah, humans are like that :)

Many jokes are made, especially about toilet paper. It is funny and I really can laugh about it as relief for in fact being annoyed about such selfish acts. I make jokes myself as well, not as means to be ignorant or to have no concerns or no feelings for the ones facing death or having to work in a dangerous environment and such, but because I believe it is good to stay as relaxed as possible and not expose ourselves to drama only. Some will be angry at jokes, I understand very well when you lost someone or are in a crisis situation, but the truth is it makes no real difference if I cry or laugh at the moment because we simply have to survive and if humor keeps people at a sane level then let them be. It is nothing egocentric, it is a way of coping and also part of someone’s character, certainly mine, because I cannot live without humor. Rest assured I feel the exact same impact as you and all others do due to the dramatic health situation and measures. Taking that in mind I think we can be happy as well in a certain way. A crisis causes togetherness, breaks down walls and opens minds to work together and survive together. If only you look at the individual initiatives already being developed here to reach out to each other I find that heart warming without wanting to sound like a cheap tabloid with easy headlines for cheering us up with meaningless ‘news’. In fact it is not meaningless I think. It shows how people CAN do things together who would maybe fight each other a month before all this over some really meaningless issue. What matters now is to flatten that curve of infection spreading and uniting in a world at risk. Time to admit the importance of acting together as the most powerful deed. Not a weapon, more a big let’s do it sign and shake hands (even if that’s not allowed anymore for real). It is the first time for me to actually feel kind of satisfied about how politicians and governments work together, despite also some differences still there. We face an impressive challenge and that needs an impressive force.

So we can do it

Yes we can, of course we can, but it will cost. Some will lose their job, some or many will die. Maybe you or I as well. All is possible because no one really knows if it hits you and when it hits you we don’t know how hard it hits you. Most do not get ill too much, but you can be the one having bad luck and end up on the intensive care or worse. In a crisis there has to be paid. Lives, finances, comfort, jobs, safety, supplies, freedom of movement and more will be affected for a long time. We are however privileged to have internet and many social platforms to stay connected with the ones we cannot see anymore for a while in RL maybe. A good friend of mine has the corona virus. She is at home and no idea how things will go. So far so good however and probably nothing to fear, but even so it brings it closer again and makes me more sensitive on what really matters in life. It is why I really do not understand people crying over a holiday or sports game being cancelled. Or a wedding postponed. That’s not the end of the world is it? There is drama and drama and staying healthy /alive is one the the most important things to cherish. Dying is the end of all and the most dramatic of all, so better be safe than sorry still is a wise thing to remember.

Speaking of death, I find the news about people literally dying ALONE the saddest thing of this crisis. Imagine to not be able to hold the hand of someone you love in your last moments of being part of this world. I tried to imagine such a situation for myself. Not to be overdramatic or something but just to examine what it would do with me if that would be a scenario once whenever and why ever, not especially with this crisis as cause. To know my husband would be in the house but forbidden to enter the room or not allowed to visit a quarantined place in a hospital due to lack of protective supplies would be extremely sad right? Yet it happens as we speak. That’s horrific and will cause an extra trauma for someone who survives. Today I said to Dr. Nax I think I would login into Second Life at such a moment if I still could and still conscious. I would seek someone I feel safe with inworld and ask him or her or them to spend the last hours with me. Or I would ask my husband to make an account and join me inworld for an as close as possible goodbye if he could bare that. I would have to choose how to spend those last hours, via phone /Whatsapp with family, in Second Life to have a ‘physical’ experience, talks through a closed door  . . . I know who I would ask to spend the last hours with me if I would be in Second Life. It was an interesting outcome, a bit surprising to myself but not anymore after thinking it over again. Anyway, that’s personal and nothing I will mention here. That’s a bit too much :)

God, already the idea to have to choose for how to be not alone when dying is horrible. And how does the other know you really have passed away when no contact allowed but maybe still alive in an unconscious state of mind. What a torture on both sides. Today all these thoughts went around in my head, so I decided to just write it down since that always helps me to get things straight. Corona is so present it changes everything and everyone. Again, not in a bad way only, but for sure in a very intense and new way of looking at our world and lives and society.

Dr. Nax said this when we talked of it: “What if Linden Lab will close Second Life due to Corona?”  I had not thought of that yet. It would mean a loss of contact with many I cherish. Quite strange and unreal. It is a hard to imagine scenario but not impossible at the moment. Skype and other platforms will not all be away at once, but if the internet would go down . . . wow, that really would be incredibly scary somehow. Ok ok, just thoughts, nothing I expect to happen, but what if  . .  imagine . .

I have to say something about this. We have a word here in Dutch for people who start to gather all kinds of supplies and foods in a way that can be called hysterical and selfish. We call it ‘Hamsteren’, after the animal itself who likes to make stashes of food. I think it maybe also is a known word in english, to hamster, but I am not totally sure. The supermarkets here are calling upon people to stop with that, but many do not listen and keep doing it. It is silly and stupid, unnecessary as well, but it indicates how people panic in a crisis situation and create a feeling of safety with these kind of acts. I have to battle between shouting at them in public or feel sorry for them, but so far I behaved and was silent. I did have to make detours to get my normal amount of supplies due to this, but ok, so be it and no big deal. I also have to laugh a bit because of the irony in this for one particular supermarket who likes to advertise regularly with  . . . .  yesss . . . . hamsters! When they do they want people to buy as much as they can from certain products, but now they ask people to not be a hamster. I would not be surprised that campaign will change after this crisis :)

Hmm too early for that maybe but it did pass my mind how sad it is the world cannot show this kind of unity for other major problems like the climate issue which is threatening us as well. How beautiful would it be to see a long lasting effect on the climate by such a worldwide cooperation. Or poverty and hunger. Or wars. I know, too idealistic, just it came up. We always seem to need being at a personal risk first before we act in the way we act now, with responsibility and solidarity. A possible conclusion could be we are horrible people to only act in a united responsible way under huge pressures of direct life threatening circumstances. I think we deserve a bit better than that and believe most people are willing to change the world but feel powerless to activate the world leaders and their main money makers on it as well. The lack of a direct personal threat makes decision makers slow, too slow, because a silly thing like an election or personal benefit and expectations from friends in business and politics count more when your life will continue as always after that.  I hope this crisis will have an influence on that. I fear it will not. We will see.

This is an article written by the really smart people and I just recommend to read it. Social distancing is the new way of life for now. Except in Second Life! You may need to click 2 buttons to be able to read it ( the FREE reading button and the PRIVACY button).