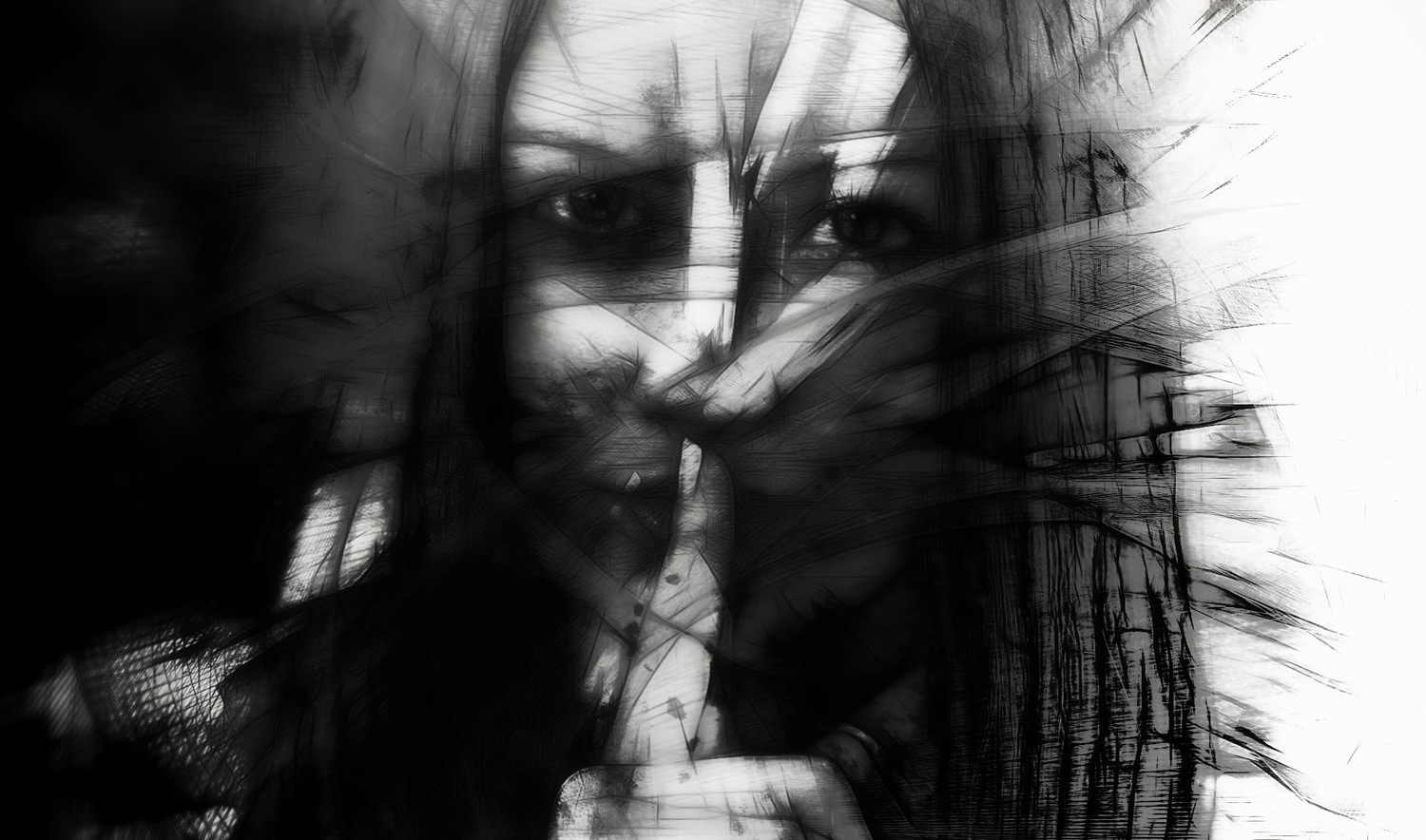 Eupalinos gave me a link to the documentary ‘Touch the Sound’ about Evelyn Glennie. I watched it at New Year’s Eve and recommend it to anyone who has an ear for the essence of sound, music and life. Yes, life  . .  I will explain later.

Evelyn Glennie (Aberdeen, July 19, 1965) is a deaf Scottish percussionist. She graduated from the music conservatory at the age of 19. Evelyn possesses 1800 (!!!) percussion instruments, some of which she made herself. She became the world’s first full-time solo percussionist in classical music, and has performed in over forty countries. She is now also studying psychology. Evelyn became deaf when she turned twelve. Around that time she learned to play timpani and her teacher taught her to ‘hear’ percussion vibrations and use her body as resonating chamber. In 1985 she made her debut as a professional musician. In the years that followed, she easily crossed musical borders. She worked with classical orchestras, but also with Björk, Mark Knopfler and Bobby McFerrin. She has made eighteen albums, won two Grammys and was nominated twice before.

Evelyn is post-lingual deaf. It means she became deaf after learning to speak, which makes it possible to talk like anyone else, which also makes her a very motivational speaker.  She feels vibrations on different frequencies and in different body parts. She does not see her deafness as a handicap herself. “I may not hear like most people, but in a different way and that’s why I do not feel limited,” she says. According to her, people who believe too little in their own capacities are much more severely disabled because they are creating a barrier for themselves they can not get through. She may call herself Dame Evelyn Glennie and published her autobiography, ‘Good Vibrations’ in 1990. During most of her performances she prefers to stand on her bare feet, to have the best feeling of vibrations. In this way sounds become palpable, which basically is another form of hearing. Like I said before in my blog  ‘Sound and Vision’. Senses that are taken away will be compensated by other senses developing a higher sensitivity.

Essence of Sound, Music and Life

While watching the documentary it became clear how SOUND fills our life. Sound is everywhere. With sounds we can detect and give meaning to the world around us. With sounds we can talk and make music. With sounds we can feel vibrations. In short: with sound we communicate. Even silence is sound in that way. Silence takes a vibration away, but not the sensation and experience in a moment of time. The opposite of sound therefore is not silence. Evelyn calls silence the loudest sound possible and I think we all understand what she means with that. Everyone will have had at least one experience of silence which felt like breaking the sound barrier through sensing this intensity of ‘nothing’ and that can be incredibly, even painfully loud in a metaphorical, physical and mental way. The opposite of being surrounded and filled with sound is being surrounded by an emptiness close to death. Without sound all that lives, basically dies and loses its soul. Imagine it   . . .  a life beyond sound and silence   . .  an empty void . . . no vibrations, no vocals, no acoustics. It takes away such a huge ability of feeling and expressing, it can be called to lose an essence of life. Mind you, I do not speak of becoming deaf, I speak of losing SOUND. Deaf means you still can feel sound. No sound is far more dramatic.

We all dislike certain sounds. Mostly different for each individual. When sounds become annoying we tend to call them noise. When listening to it in another way, noise can become an acceptable sound again. The interesting thing of sound is we all have our own personal perception of it. It is linked with what we call taste. And taste is as personal as your DNA. Sound has no DNA, it only is something which resonates in us and makes us respond on it. Sometimes it makes us feel like dancing. Sometimes we like to just sit and listen with our eyes closed. When doing so, listen with awareness of the sounds around us, you will hear a whole new range of sounds you never heard before. The popular sound quiz in which someone needs to guess a sound, probably is so interesting because it provokes and activates our mood for exploring sounds of all kinds of objects. It makes us listen in another way at the surroundings during our daily routines. Like sharpening a pencil we sharpen our sense for sounds in such a quiz. How much fun will life become if we handle sounds more playful like this. Experiment with it  . . . .  Listen to sounds and to music you always avoid due to personal preferences being cast in stone sometimes, or because believing only melancholia and nostalgia (safe and known) are the source for pleasant feelings.

A very nice example of how much fun it is to play with sounds are the ‘Make Tune’  projects taking place at Blue Orange in Second Life.  I did not participate (yet) myself, but I do know the fun of  playing with sounds, rhythms and dynamics in RL very well. The ones that did participate had big fun is what I heard. And of course! Creating and expressing yourself through sound is highly satisfying and a way of showing a part of  YOU to others in sounds. Your pixels become palpable sounds others can resonate with. How cool is that? Super cool yes.

The links I share below are all very beautiful to hear and see. But some of them take time. You decide if you make time or let go of it. But letting go of it means missing something very special in my opinion.

The first video is the audio recording that was made during this documentary. Evelyn Glennie performed with Fred Frith, unprepared, and totally free in what it would become. The result is superbe. Pure magic to me.

The second video is a TED talk of Evelyn called ‘How to truly listen’ and that one actually can be seen with subtitles in several languages.

Last of Evelyn but not least, a famous piece of music, Maple Leaf Rag from Scott Joplin and her project with Björk called Oxygen. But there is much much more to listen, so just use YouTube.

As extra I put a video of Fred Frith, a solo performance. He may have been ‘only’ the guest musician in the documentary, but his music is as much worth listening to. Very experimental and very interesting. Fred Frith is an English multi-instrumentalist, composer, and improvisor, best known for his guitar work.

And because the title and lyrics are so perfectly fitting in all of this also a cover of the famous song ‘Sound of Silence’ from Simon and Garfunkel , performed by Disturbed. I chose this version because of the powerful expression and use of a percussion instrument in the video and music.

Ok I confess, this needs some patience, listening to all, but you will be rewarded with good vibrations! Let’s call it the art of listening. Art never is a waste of time.

A Little Prayer by Fred Frith and Evelyn Glennie

TED TALK: How to really listen

Oxygen by Björk and Evelyn Glennie

The Sound of Silence by Disturbed

The Sound of Silence

Hello darkness, my old friend
I’ve come to talk with you again
Because a vision softly creeping
Left its seeds while I was sleeping
And the vision that was planted in my brain
Still remains
Within the sound of silence

And in the naked light I saw
Ten thousand people, maybe more
People talking without speaking
People hearing without listening
People writing songs that voices never share
And no one dared
Disturb the sound of silence

Fools, said I, you do not know
Silence like a cancer grows
Hear my words that I might teach you
Take my arms that I might reach you
But my words, like silent raindrops fell
And echoed in the wells of silence

And the people bowed and prayed
To the neon god they made
And the sign flashed out its warning
In the words that it was forming
And the sign said, the words of the prophets are written on the subway walls
And tenement halls
And whispered in the sounds of silence

(Lyrics and song originally by Simon and Garfunkel)