I will start with a quote of him:

Giving an example of something you see as truth, valuable or not, is a good way to confront people with their own vanities. Like Lalawood shows how Ego’s in Second Life can lead to hilarious, ridiculous, pitiful behaviours. Of course replies on that will be made by people using Lalawood as their example and proof  I am the most horrible creature and nemesis of arts with putting up Lalawood. Theda, Iono and Jade are guilty as charged as well as accomplices in my supposed insensibility and hate. In fact one artist decided to leave the gallery due to Lalawood being near to that person’s work in the gallery as well, a few days before the opening.  The demand was I would leave, but that clearly did not happen. One of the things that person did not do was visit the installation that caused the anger (after telling what it was about) and at some point asking me this: “Do you really think what you are doing is art?”

If that person actually would have visited the installation this question would have proven itself to be irrelevant. The installation is a satire on Second Life art, where every prim being modified or decorated with some home made texture is called art and every creator of that is called an artist. And people who know me a bit longer and better also know I always have refused to do that and also have refused to see myself as artist. I create yes, I debate, I challenge, I confront and I tease and itch regularly when doing so in blogs or like now with Lalawood. If you like to call that art, be my honored guest, but I am not with you in that.

Lalawood is an example, an annoying one for people who feel it as a personal attack or try to cover their own annoyance by telling how it attacks others. I think it is better to ask why an example annoys and feels personal. This means to me it somehow addresses to something inside you we will call a sensitive spot, a feeling of being humiliated and not acknowledged as true artist (whatever that may be). But to say that out loud is embarrassing, because it shows exactly the issue with ego Lalawood exposes. Telling the public the installation is an insult on art also means you yourself feel insulted personally. But why would you feel like that if you are convinced to be a valued talent, without a giant ego.  Why resist to be seen as someone with too much ego if you know you are not like that at all?  So, to be annoyed actually reveals what you say to not possess: a hunger and ambition for being seen as the talented and valued person (in arts or something else) and needing confirmations to secure and satisfy your ego.

So, no, Lalawood is not art as far as I am concerned. It is just a work of a mind that regularly likes to be not political correct, as counter weight on ‘all being amazing’ and of a person that refuses to always and only please for the sake of compliments and polite replies back. Last but not least Lalawood also is reflecting back on myself, ourselves, as creators who also like to be seen for their critics on ego. We are the living proof to also be not free of it, because why else make an installation on it, promote it, defend it and like to hear it is understood by many visitors as a statement they all recognise? We enjoy being the ego busters as much as ego enjoys attention. If that’s not ego   . . .

Wow, so you have an ego as well?

Of course, we all do and ego never will die. Just there are ego’s and ego’s. Some ego’s are so big they really make you and themselves sick. The ones that only can see themselves as the center of the world and will do all to gain attention, compliments, status, fame and often use statements in their profiles/ notecards/ biographies that read as if you just met mr. or mrs. Blah Blah who graduated cum laude on being the best pretender. Ok, I admit, that’s a skill too, with also many annoying examples. Or shall we call it art maybe? Because some are so good at it it almost looks like real value and real importance. The art of  make-believe? 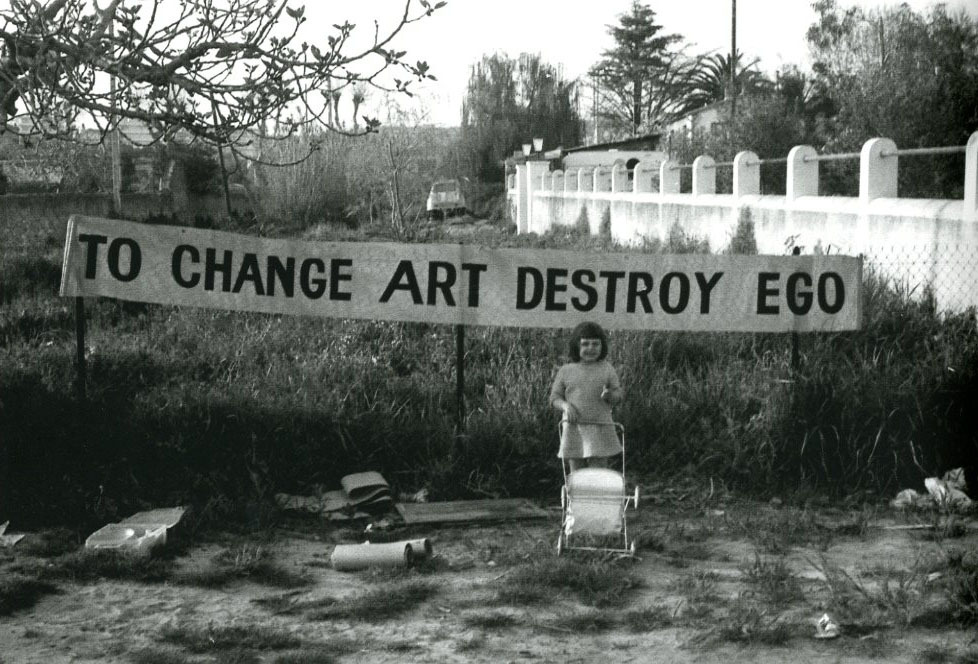 A friend gave me this quote last week and also said ego never will die. Ego does not have to die really anyway, we also need it, but to monitor it to not be your leading motivation is quite refreshing don’t you think so too?  Apart from that I think Ben Vautier is the kind of person that would understand Lalawood.

Vautier became interested in the French dada artist Marcel Duchamp, the music of John Cage and joined the Fluxus artistic movement in Octobre 1962.

He is mostly known for his text-based paintings or « écritures » begun in 1953 with his work “Il faut manger. Il faut dormir”. Another example of the latter is “L’art est inutile. Rentrez chez vous” (Art is Useless, Go Home)

But annoying people, is that your hobby?

Well depends how you read it I guess. My hobby is not to annoy people. But people that are annoying me can become my hobby for sure, for a blog or something else, especially when the reason for finding them annoying is something I see as weird, not legitimate or hilarious. So, annoyed people can be a hobby, yes. That is weird, hilarious and maybe even not legitimate too, I know. And probably very annoying to some , which qualifies me as becoming someones hobby too maybe!  I always knew deep inside I am serving the public with all my amazing qualities and ego. Second Life would be so boring without me. Real life too of course.

Good grief, you have nothing better to do?

Hmmm, like chasing fame? Or become the silent obedient follower?  What is the value of adding another green dot on the map being like that? Is that better? Or just more convenient and easy? Does it make me sweet and attractive? Or does it make me a literally meaningless character, exchangeable with dozens of others who never confront, always play nice and please? I rather like to be me and being me means I am not interested in being liked for playing a version of me others like better. It would kill my identity. Ego and identity are close friends. But identity is what defines me as character, and ego is the one defending that character. So yes, I am a bloody egoist when it comes to sticking to my own beliefs instead of adjusting them for being more loved or liked. Such love or likes I could not bare.

What the heck is that nude pic?

Well that’s clear huh? That’s my ego. Trying to gain attention with boobs, nudity and sexual imagination. This is how avatars can become a strategic move for the like balance and feeling loved and wanted. Not always no, I also can like the nude pics just for what they are, an aesthetic expression, but the other way is more common in Egoland. I made this one for a friend. Was testing a cushion on request and played with WL and poses after that. So that friend now has my nude body on his screen to enjoy. Or maybe he threw it away thinking I want attention too much with seductive pictures. Undress to impress, something like that and then suddenly see the ego appear after sending it? It is interesting how everything we do can be seen from multiple views, sometimes  inspired by conscious feelings , sometimes unconscious. Fact is, as soon as we send a pic we expect a reply in some way I think. Because we are like that. We like to be seen and we like to be liked. But when it does not happen it is not the end of the world. Then you just had a lesson of humbleness and awakening :)   Did I get a reply?  None of your business! Thats wayyyy too personal! Smirks.

I end with a very beautiful piece of music from the Cinematic Orchestra. Let me dedicate it to all who like to create and share in a free way and especially in their OWN way. Feel free to annoy me, feel free to be annoying to the world, feel free to be silent or different as well. Just be you. And yes that means you cannot be friends with everyone, maybe also not with me.