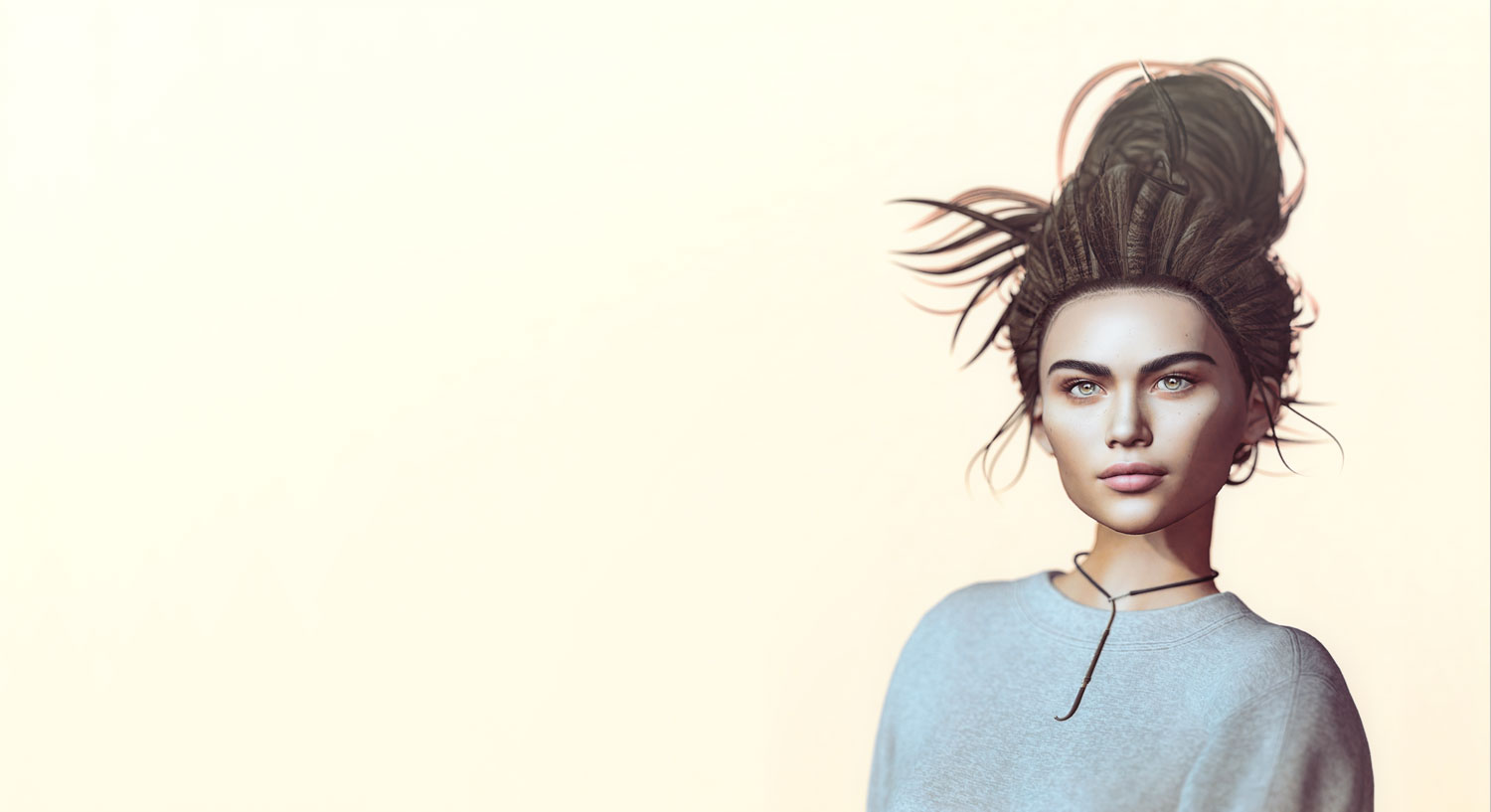 No, this is not going to be an essay about strong or classic whatever matters. This is an ordinary blog/ follow up about the Genus head I have since a few months and still was struggling with to find an applier I like. I may have found one now. I am at least walking around in it  . . .  that’s a start. But of course now there is a new ‘problem’. Genus has released a new head called STRONG FACE and makes it impossible to test in a nice way all of a sudden because adding gaps in the head. It makes you look like wearing ski glasses, really terrible to test. I know other brands do this too but it is freaking annoying and not customer friendly at all. And since I will not spend around 5000 Linden for a new head I cannot test properly I ran to photoshop for a better view (ty for all the effort I have to make Genus  . . . sighs . . .  )  I understand brands fear certain theft etc of their design, but come on . . . . be nice to the ones that want  to be nice with you and buy it. In a RL shop I also do not get a dress with gaps to test   . . .  or a pants without legs or a half leg. Many clothes sellers also have this super annoying HALF DEMO or TIMED DEMO packages or NO COLOUR HUD demo to make you buy more. It’s not nice and very lazy as well. Especially when no full colour hud or full texture added in a demo you are likely to buy a combination you do not like as much as you hoped it would be and buy an extra or even a few extra to get it right. I had this last week with RKKN, but there are tons of sellers doing it that way and it totally SUCKS.

Okayyyyyyyyyy,  back to he head which made me start to rant about Second Life selling strategies, back to the GENUS STRONG face compared with the GENUS CLASSIC FACE. There also is a babyface but that one most certainly is not my style and I therefore skip it.

At the top of my post there is an edited cover pic of the Genus Classic face. Below I will post unedited pics to see more clear the differences. I erased the gaps in Photoshop and filled them up, I also can derender the DEMO signs inworld (sometimes I can do that in Firestorm and sometimes it refuses), so it looks as if I also have the STRONG FACE head, but I do not (yet). I tested with a new applier from Bold and Beauty (Rebel Gal) called Kaia. B&B /Rebel Gal renewed all body appliers as well since my last buy of  those in January 2017 for my ‘old’ look. so be aware you will need new body appliers, also when already having B&B/ Rebel Gal body appliers, but their price is good for all colours in one pack. Low even. I personally find the skins a bit too smooth for the body. It could have had some more imperfections, and there is a bit too much pink/red tone in the lighter skins for my taste but maybe that’s also because I had a less pink skin of them before. They did improve things as well btw in the renewed body appliers. The butt always had a real dark spot, smudged and bit like as if   . . .  well you know  . . .   and that’s gone now. Anyway, I like the Kaia skin enough to ‘overcome’ some pink-ish mooth perfection:) And yes, you may have noticed  . . . thick eyebrows is something I somehow am attracted to. No idea why, I just am.

You will see a front and side pic from both faces with the same head applier Kaia and the same shape (my own).  I never use the standard shapes added by skin and head sellers, I want to have SOME personal touch as far as that’s possible in SL.  I also add 2 animated gifs made with Gyazo to switch between the pics and see the differences in that way as well. 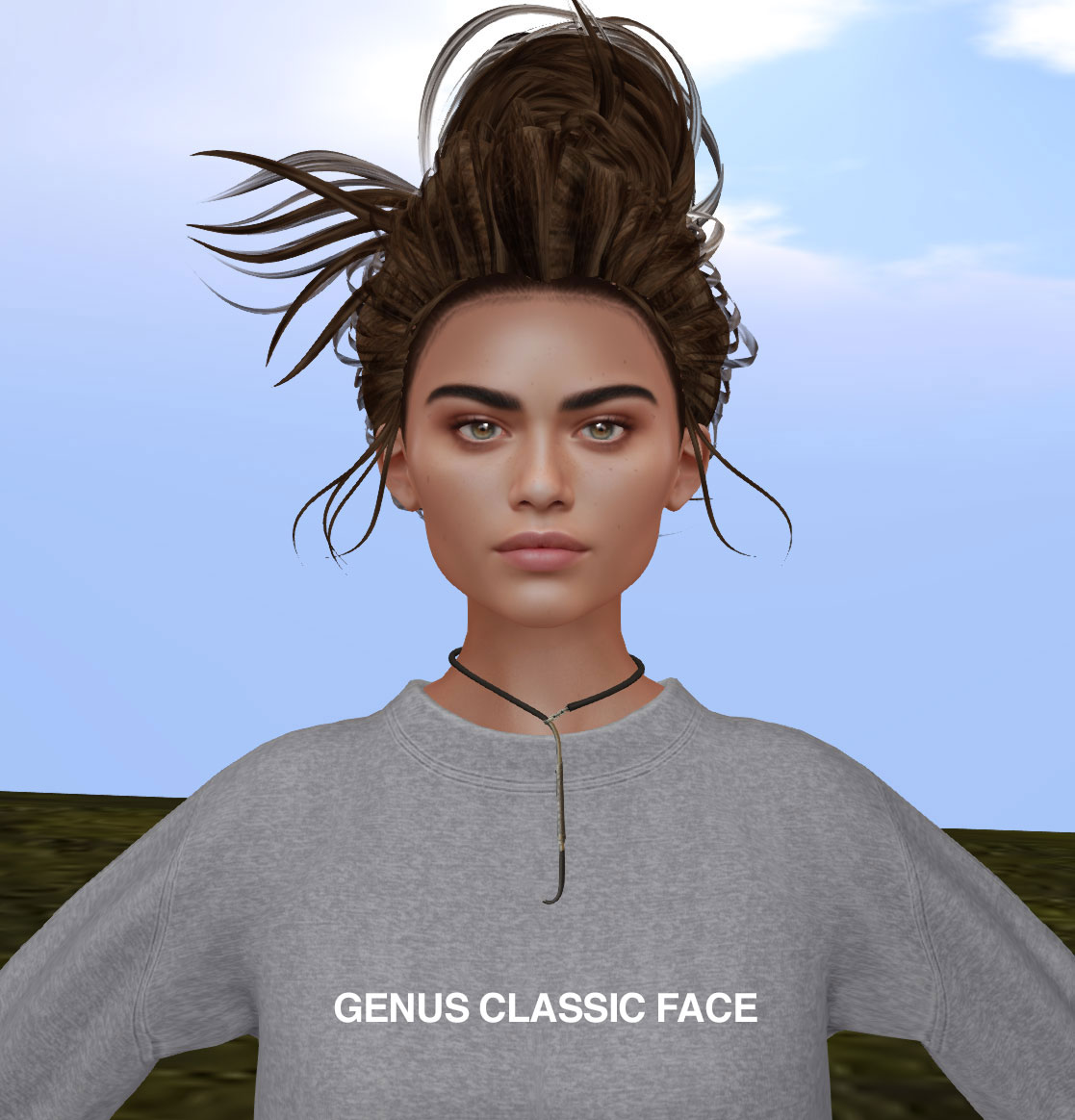 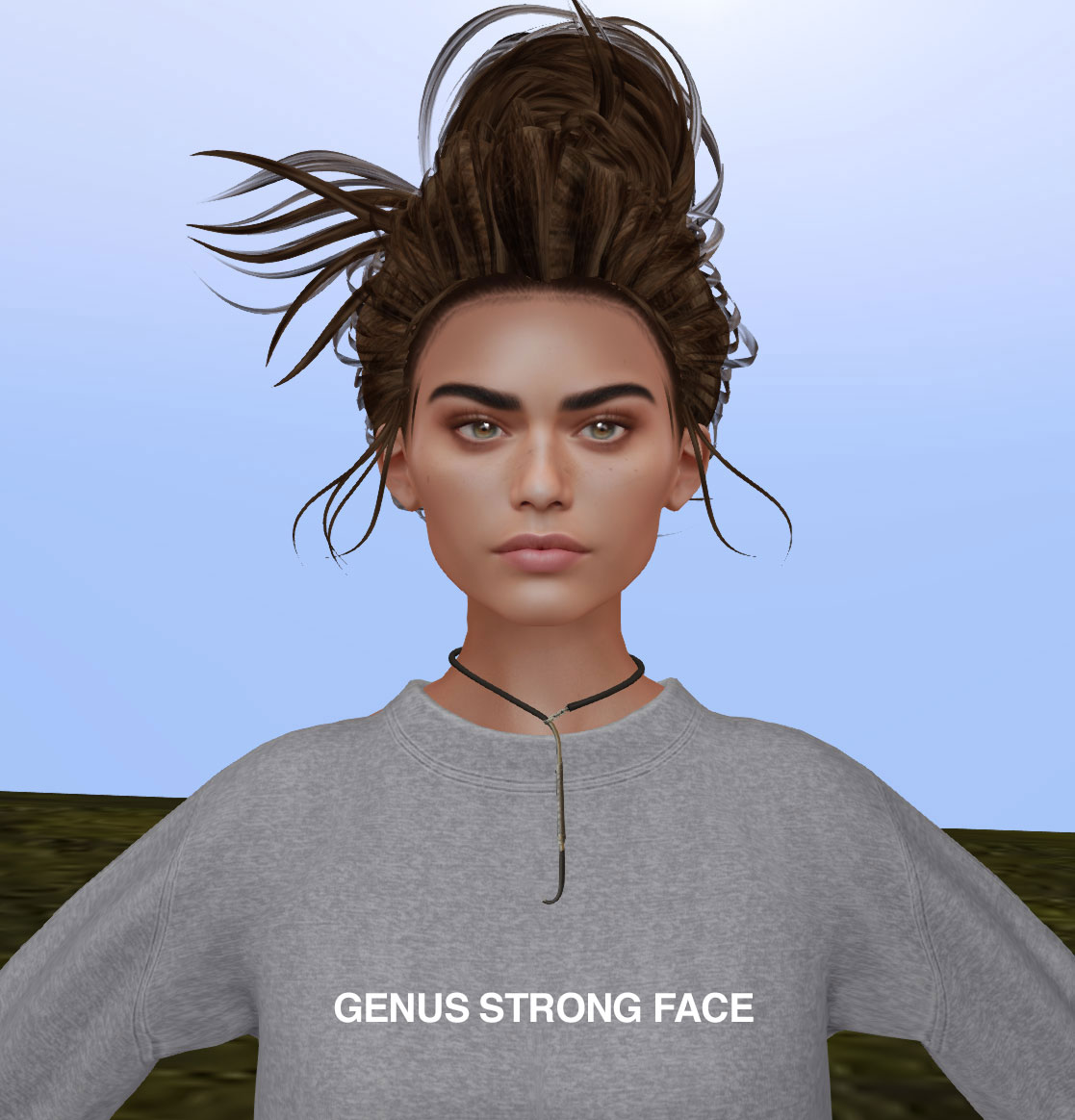 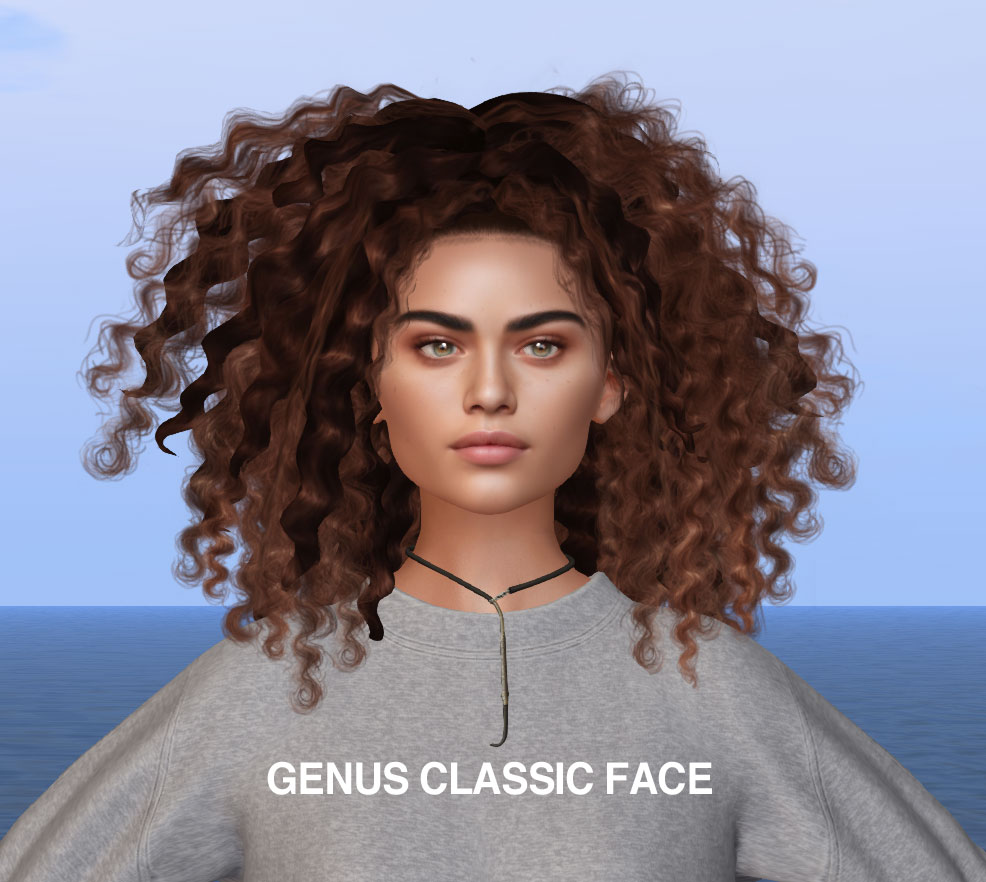 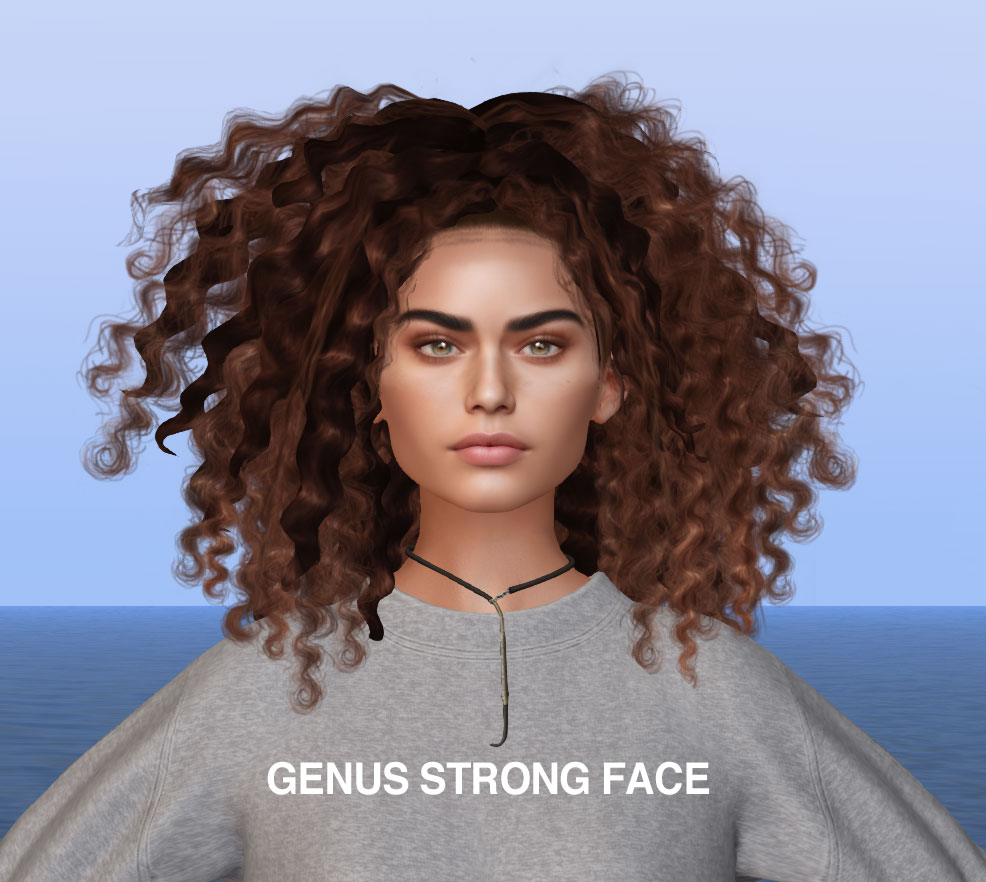 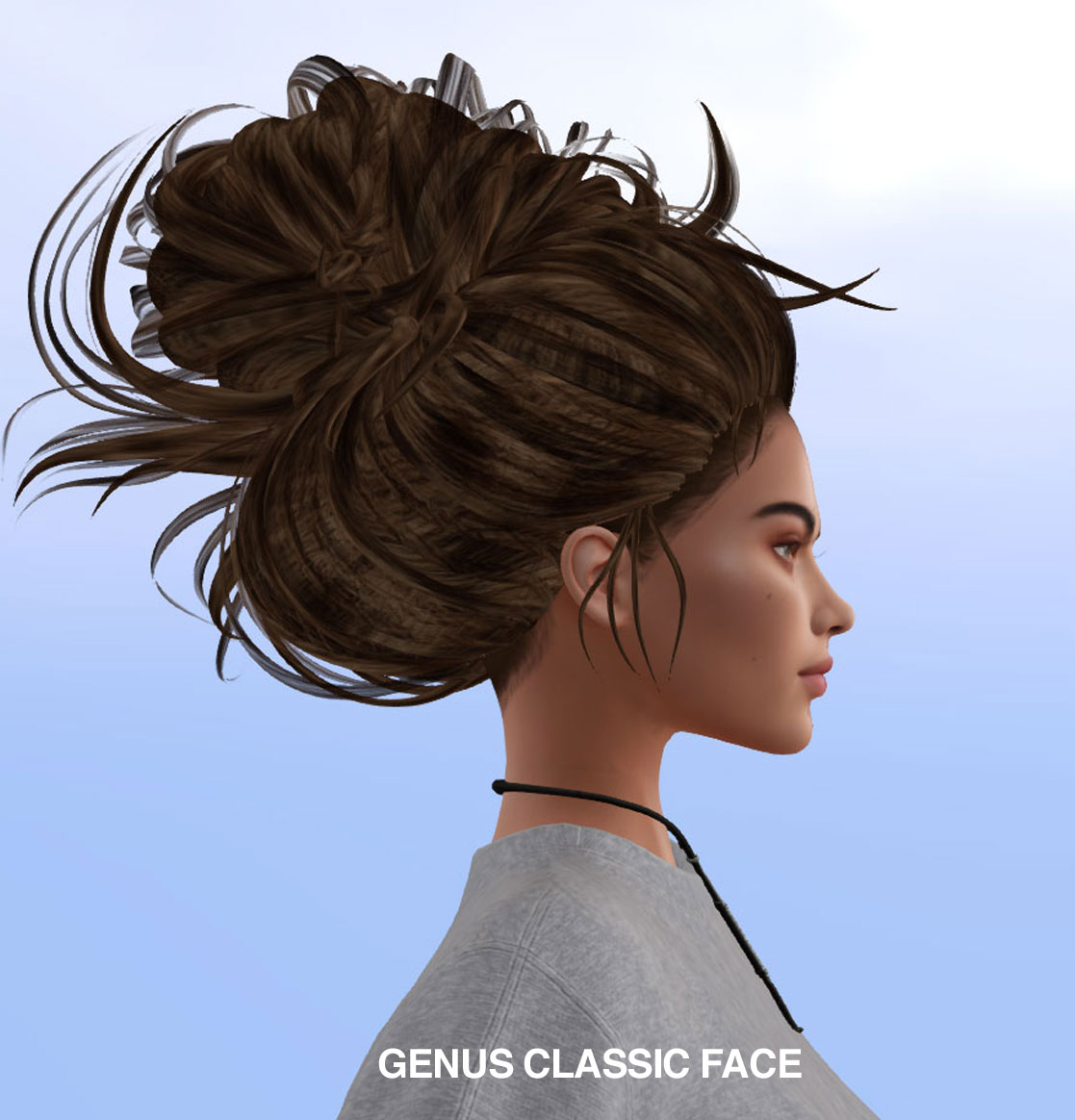 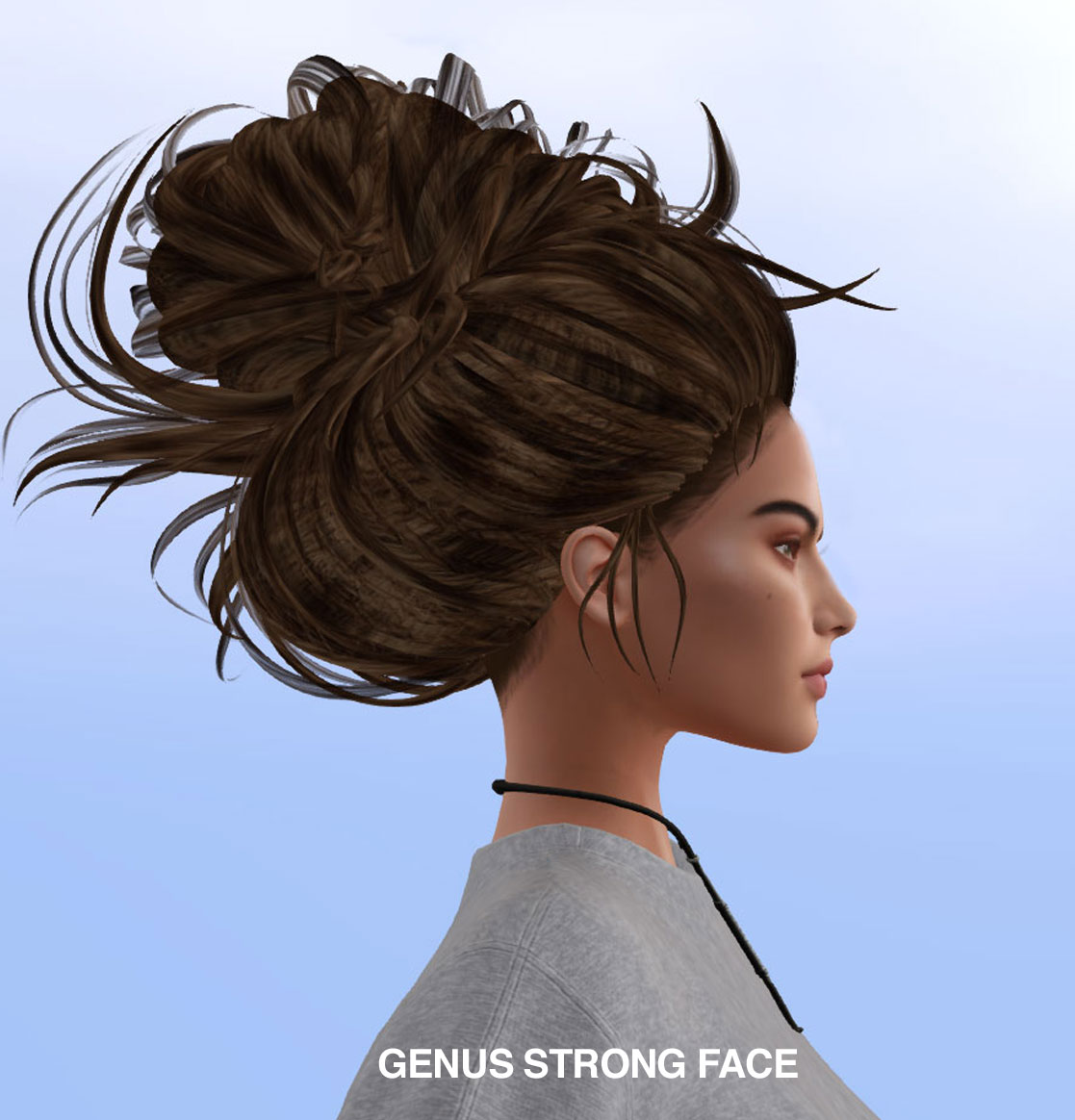 Is my ‘problem’ solved now?

Hmmm not yet. The STRONG FACE indeed has that look the name claims, so that’s good and I like the look. If I like it enough or better to pay for it I have to think about a bit more. If convinced I will,  if in doubt I will not. I am prepared to invest some money in a new look, but I have to be very sure I really like all I see. The nose and the en- profil look from the strong face in general are less elegant, more strong and tough as well. On the other hand such a face suits me better than too sweet and  girly. I never was or will be that type, also not in RL.

Anyway, who knows I have helped you a bit to decide or at least be  able to see differences in a decent way without these  (fill in a swear word …… )  GAPS!

I will not go in detail about the HUDS. Plenty other people who did that already and not that kind of blogger in general here. I will tell I do not like the eye blinking of the Genus head so far. Mainly because the eyes roll up and down all the time, making you look quite silly. I will walk BLINKLESS (if that’s a word  . . ) until it maybe will be improved I hope. The pre-installed Omega feature is convenient with appliers.  A one time click is needed with the OMEGA for GENUS tool, but after that you can do without because it activates the built in OMEGA compatibility :)

Hmmm, it always takes some time to get used to a NEW look, but I will try to not delete my new self when in this nostalgic mood longing for the familiar look :)