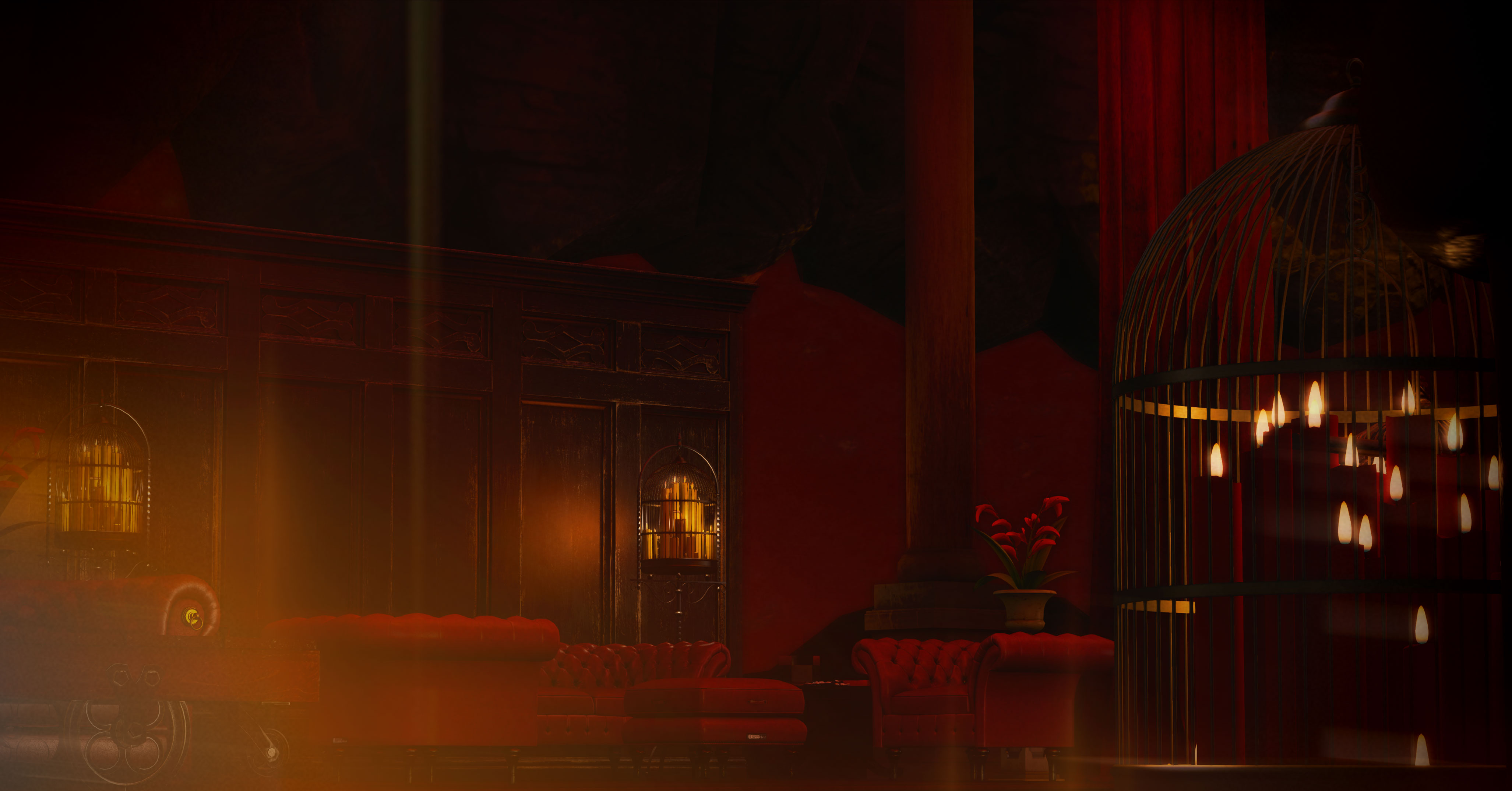 Nobody knew exactly when the small hamlet of Valmoor was deserted. Some say it was the trains that stopped coming. Others say it was the economy slowing down, that made villagers leave for the Big City. Others whisper it was the thing in the woods that caused nightmares and made people flee the town.

One day an eccentric and extremely rich couple bought the deserted village. From then on, the lights in the abandoned houses flickered again. Each evening, often late at night, more people arrived. Dressed in fancy clothes, sometimes masked. Music was heard throughout the streets. People whispered about strange rituals being held in the dungeons underneath the city, and spoke of Secret Societies.

According to the London Times, Valmoor Manor housed a “gentleman’s club” which was known to ridicule religion and promote decadency. The supposed president of this club was the Devil, although the members themselves did not apparently worship demons or the Devil. The club admitted men and women as equals, unlike other clubs of the time, but maintained a strict dress code. Men should be wearing suits, and often masked. Women were allowed in lingerie, or even naked. The club met on different weekdays at an underground location in Valmoor. According to at least one source, their activities included strange ceremonies and partaking in open sexual acts.

Everyone adores M&M’s. Chocolate hidden in a colourful shell.  Once you start to eat, they keep you hungry for  more. This lust for consuming a treat has been transformed into a new delicacy at Valmoor. Strangely enough also connected to M&M’s.  It must be the adult version of this well known brand, not to be sold at the supermarket but on request or invite only. All I know is it is offered by a somewhat peculiar rich couple, Megan & Mako, calling themselves the absolute, dominant, monarchic, despotic and royal rulers of this place. I decided to explore their place last night, trying to get a glimpse of it all before the opening party this evening.

One thing is clear. Lust rules. In all tastes and sorts. A lust and feast for the eye to start with. Amazing what can be done in a skybox of moderate size , giving you the look and feel to be at a whole sim. The place is a mix of victorian style, magic, erotics, decadency and grandeur of lost times. Harry Potter X rated version, something like that. Very well done. Eye for detail, perfect choice of decorations and styles and not so big you get lost and give up finding your way through the build.

The real deal for lust seekers is underground (errr is that possible in a skybox??  >> heck yes it is) . One of the buildings contains a stairway to heaven, oh wait no I mean hell. The ever patient butler or whoever he may be (the devil in disguise most likely) will show you the way down to your own decay and promiscuity, without asking you a fee, except maybe to have the liberty to be the indiscrete voyeur of lustful secrets.

Once you entered the club, the Secret Society of Valmoor, you are being welcomed by warm red furnitures, inviting you to take a seat. Ok some will capture and lock you when being  too greedy with saying yes to all the menu or experiences offer you, but that can be considered as your personal lust identity and scale I suppose :)  It made me experience the hot and tormented life of  being a lamp watching all, but not able to do a thing, not even stand or click anything. The club also is very well made and offers room for quite a lot of indecent behaviours. Delicious decadent Oscar Wilde mood is how it speaks to me.

I consider to send a bill to the owners for my chocolate addiction being stimulated as after care medicin. I fear they will deny all responsibility however.

Two songs of Enigma came in mind when visiting Valmoor :)

The principles of lust

Valmoor is an adult group, based on real storylines such as the Hellfire Club, during the Victorian Age. It’s a story about decadence, passion, and adult things. And hey, guess what: we expect you to behave as an adult here: respectful & fun, and make it fun for others as well. You will find information about the setting and background in the historical notecard.

This is a member-only sim. Your membership helps us pay the bills.

THE 10 COMMANDMENTS: Let’s keep this short. You’re an adult, you should know how to behave.

Thanks for reading this. Now go in and enjoy yourself, amice :)

Who are M&M and where do they hide and practice their lust?

P.S.  The sim is best visited with Advanced Lighting and Midnight Setting.
P.S. as well: Very well done both, congratulations and good luck :)