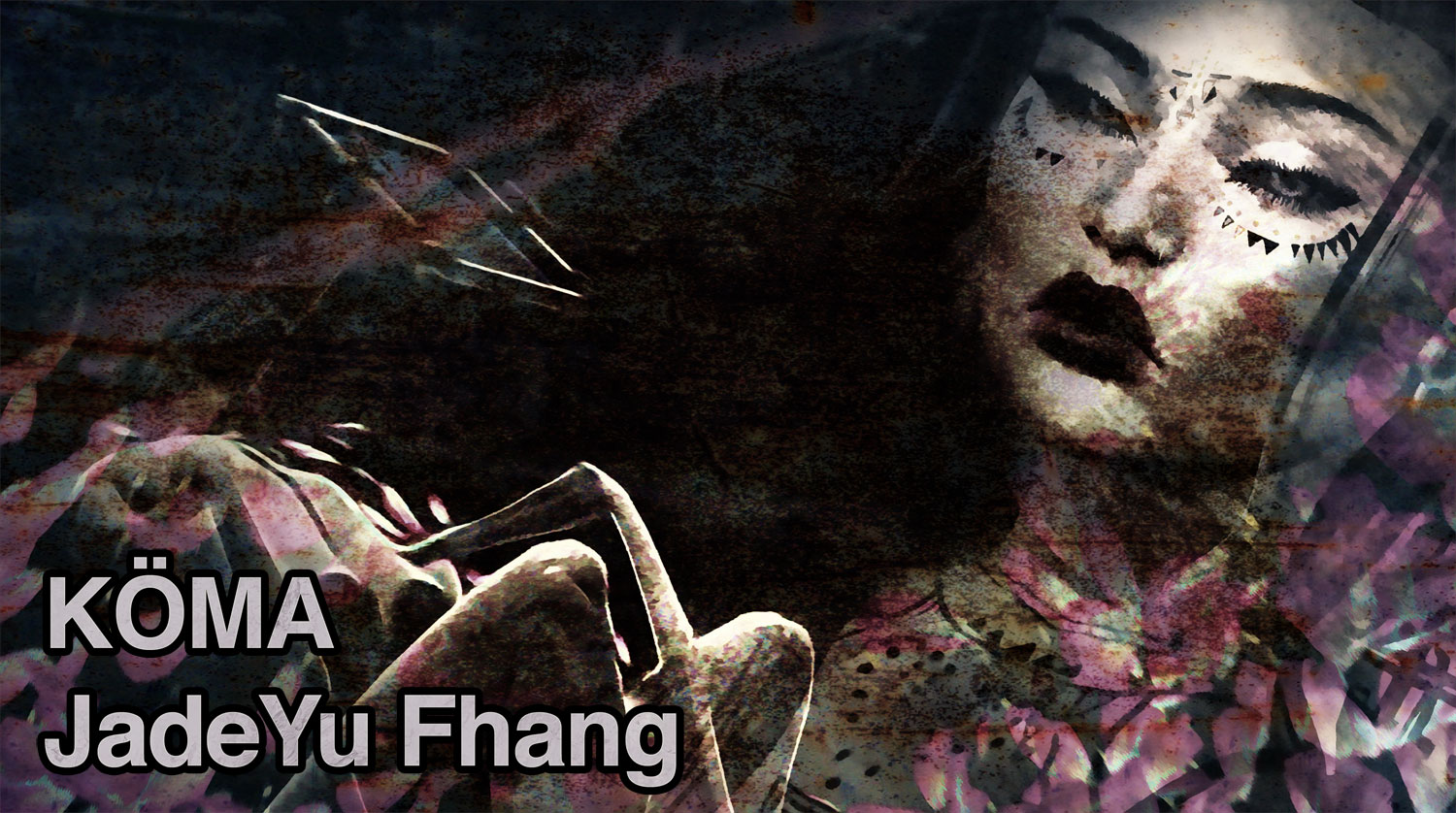 This sounds as if someone requests a trip to a sunny Turkish or whatever island to enjoy a holiday. But when you hear the voice and deep resonating sounds of this request as it can be heard at LEA 22, you instantly know this is another kind of journey.  A dark one actually. Take me to KÖMA leads you into a world of apathy and is created by JadeYu Fhang (installation) and Morlita Quan (sounds). When you land at LEA 22 it is essential to have sounds on and to walk and fly around by yourself since there are no TP’s to the higher parts of the installation. 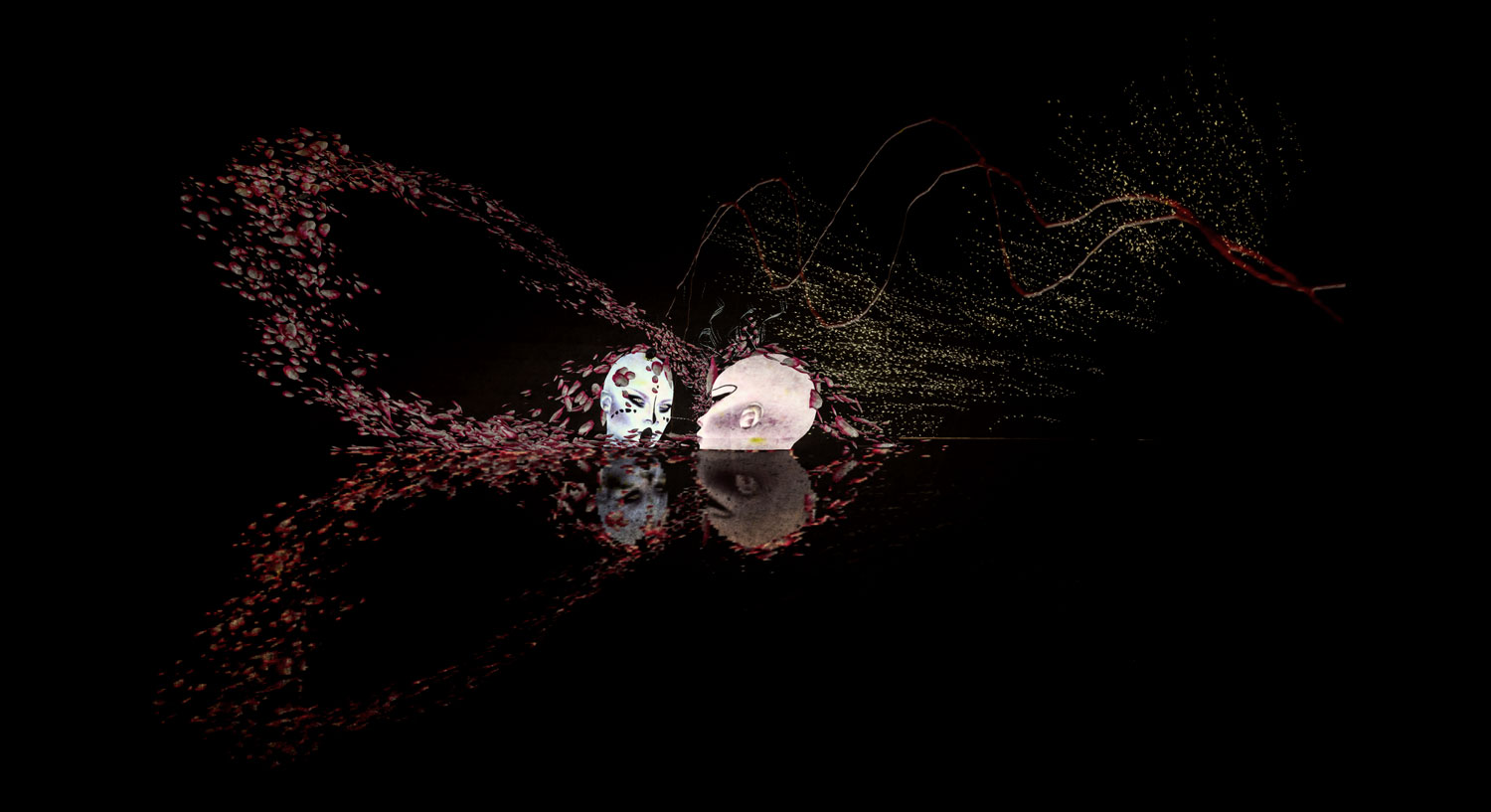 There is a big contrast in scenery. You see petals swirling around like ballet dancers performing a dramatic love story. There are golden pieces, shattered over the place as well which gives a special vibrance of light into the dark environment. But when you look closer and listen to the voice and sounds, a feeling of discomfort is inescapable. There is literally something in the air at LEA 22. A threat, a darkness, a catastrophe getting closer. Something is out there to  grab you and kill you. The interesting thing is you will not even notice to be grabbed. You will  consider the sounds as present but not dangerous. Why would you  . .  a sound cannot kill so easily, only hurt or damage. But it is exactly that way of listening which proofs we already all are grabbed. We are in the middle of the catastrophe without realizing well enough we are part of its machinery to make it bigger than ever. 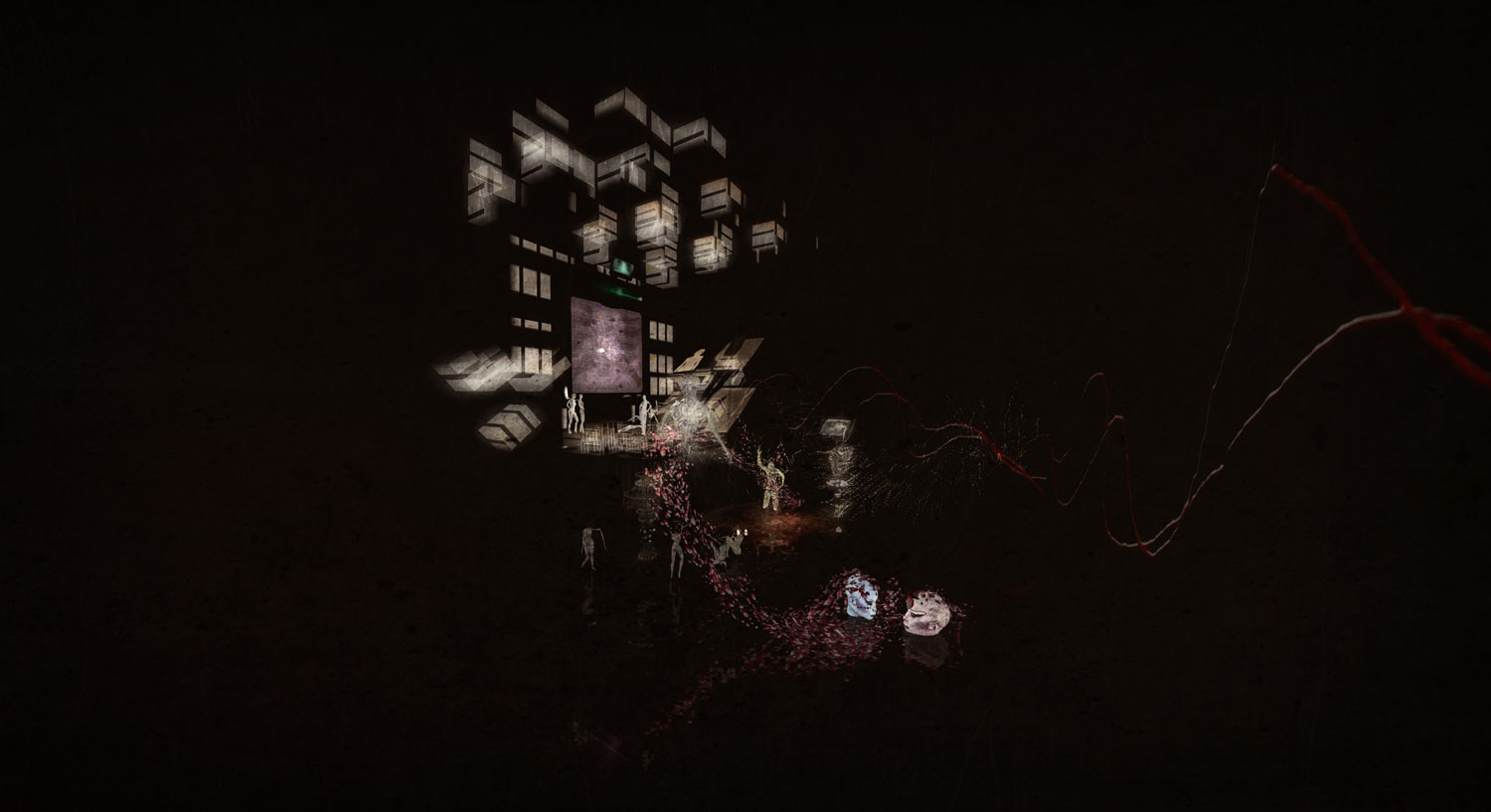 The installation somehow made me associate with the Borg Queen from Star Trek. Their famous and repetitive message was: Resistance is futile. You will be assimilated. The Borg had an almost perfect system to brainwash others they met on their way to completion of a Borg universe. Once you would be captured you would lose the ability and drive to act by or for yourself. You would never resist anymore to evil, destruction and power abuse. You would not feel anything of empathy anymore and not care about the world. All you can do is act in purpose of making the system you are part of become stronger.

Köma refers to your brain being exposed to so many media it will get into a state of coma. Your brain becomes immune for feeling empathy after seeing terror and injustice 24 hours a day. Your brain will get a system overload of things to care for and act on, and crash into pieces.  Your former desire to want to make the world a better place, is being replaced by apathy and helplessness. You change from active to passive, because it is too much to process and too many complexities. You feel like being unable to handle all. Instead you keep your world small and comforting. You choose for the sweetness of a life where petals will surround and protect you against the hard reality behind them. To not see and hear bad things, makes it possible you can pretend to not know them. Less guilty feelings with the excuse of ignorance is a way out. Consume all media as a far away world where others make a mess and not you, is easier than admit you do the same with being passive where acts are needed. 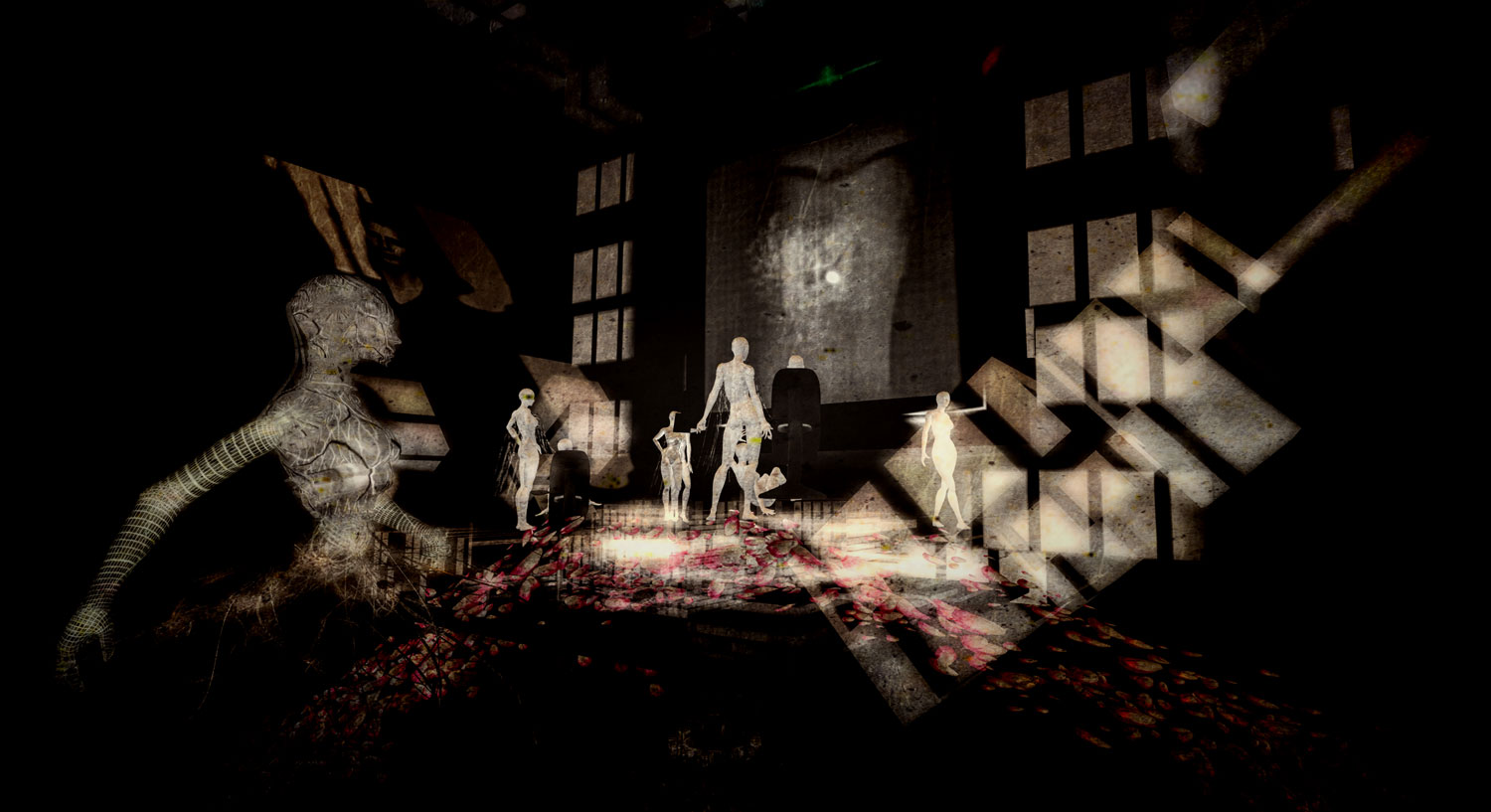 We all are in a KÖMA

We all do it  . . .
We want climate change but do way too little.
We want a safe place but refuse proper help to refugees who need it more bad.
We want money and a healthy life but spend tons on bad habits.
We don’t want a war, but start one when the square meters we call HOME have to stay free of  other skin colours or other believes.

We live in and are part of a world where fascism is hot again. A dangerous and disgusting revival of violent patriotism, nationalism, fascism, nazism, xenophobia and populism is being OK for many. Europe and the whole world seem to have forgotten how things went terribly wrong in a not so lang past yet. Media can inform us and spread knowledge, which is good, but the influence of these same media can be manipulated as well to misinform and make people scared for others and protect what they know as SAFE, their own individual life. The fact media can make us very anti-social  (misinform, brainwash, loss of empathy and altruïsm and world wide solidarity)  makes the word ‘social’ in ‘social media’ at least controversial and ironic. 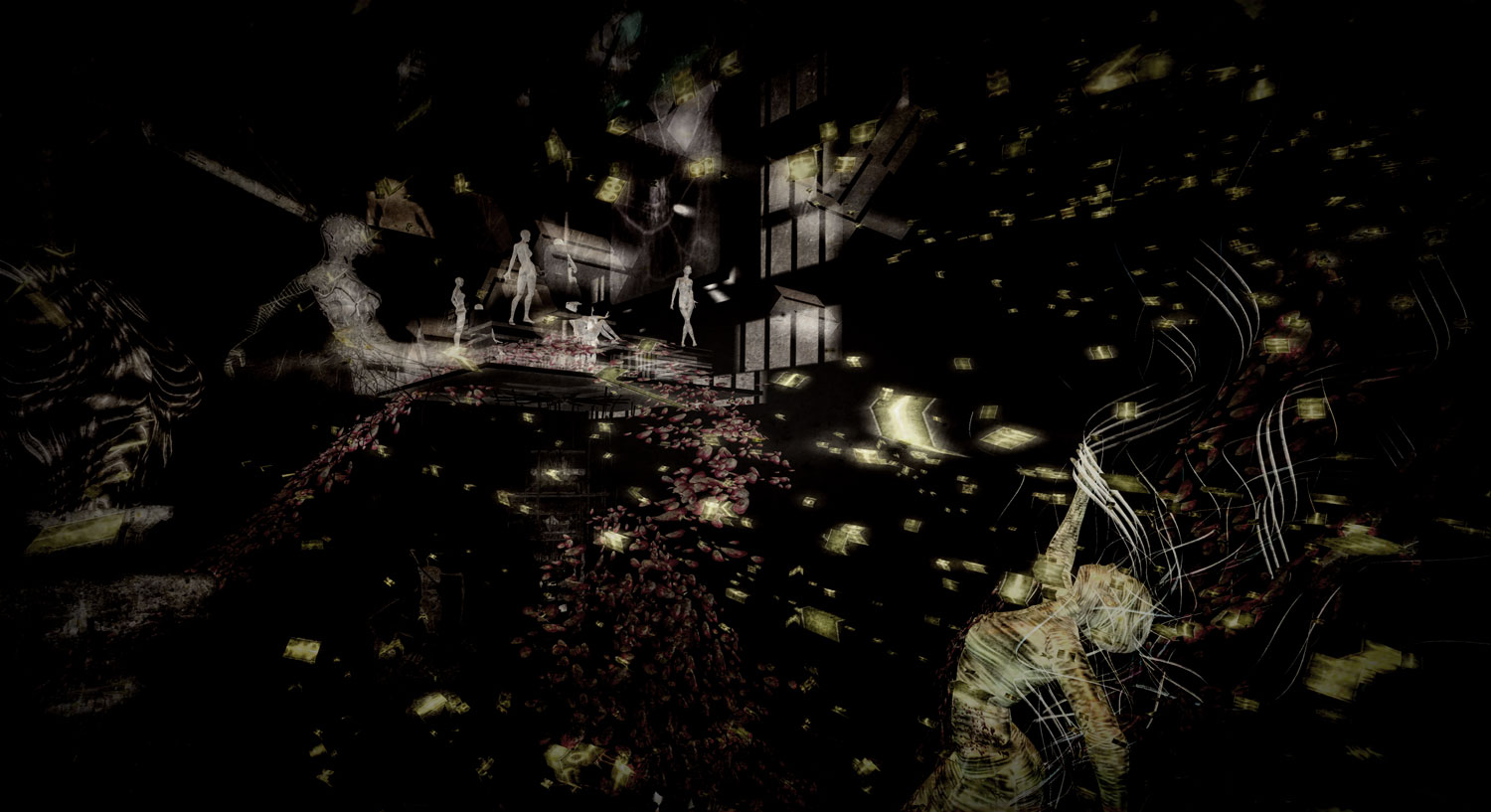 All has a price

And of course it is too much to be able to care for all the world. But to only care for oneself is the other side of a spectrum. It is good to not be silent when things go into a state of apathy and injustice. It is good to care for the environment instead of thinking your part will be too small to help. We need united acts to make things work on a bigger scale. When governments cannot do that, we at least can show our own efforts when we get that chance.  No one expects you to change the whole world. But no one should expect change by self-protection, exclusion and denial of responsibilities. Yes you matter, your village or city matters, your country as well, but it is meaningless and of no value when your world loses connection with others that also matter or when your needs to have your nice life means a bad life for others. Exhaustion has a price.  Climate and food are worth our attention. Fascism and all its ‘charming’ companions also have a price. The price of losing a heart and humanity. If that’s what you see as fit  . .  to survive, I suggest to read some history. Never ever, have such sentiments and ideals solved anything. They only killed and destroyed what scared them. To be scared that much means you have lost your sense for balance. It means you are in a Köma as well. Not the one of not caring. An even more dangerous one. The one of only caring for yourself.

An extra visual is made with Slidely. Decided to give that a try after seeing it at several other blogs and liking it.
I recorded the sounds as well (poorly) as music background

JadeYu herself is a fine example of not being passive at all. What I know of her is her being a relentless activist for all kinds of injustice and environmental causes. She is not just making a nice installation, she tries to live like a person who stands for what she shares in her art works. I admire that and have a lower level of being an activist, but try to do my part where and when I can. At least show some support to others who do what we feel not up to is already a good thing. Plenty good organisations to make our world indeed a better place, even when knowing it never will be perfect and looks like dragging water into the sea. Someone or something having a benefit, is win win. Water can be shared instead of spilled into the sea. I like KÔMA a lot and consider it a wake-up call we need to stay hearing :)   And one remark: Jade told me to see HOPE as passive as well. HOPE is not changing anything   . . .  Makes sense huh   . . .

Iono Allen made a  nice machinima of the installation:

You can visit KÖMA at LEA 22
The official opening is Sunday, October 28,2018, at 11:30 SLT
Music will be performed by Morlita Quan