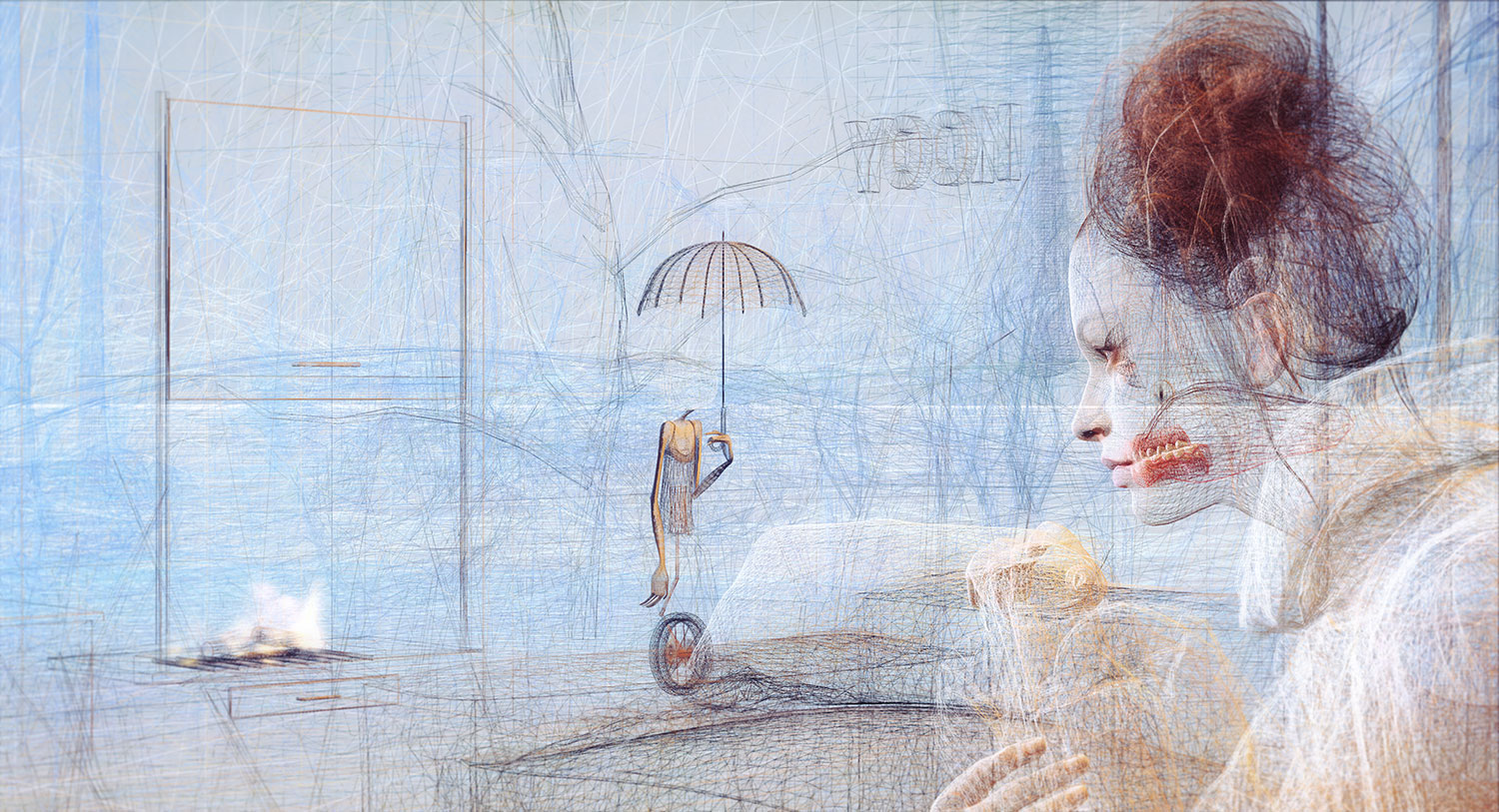 I am extremely ambiguous when it comes to differences between men and women. Part of me shouts they all are the same complex humans with ‘only’ biological, evolutionary differences and part me of shouts differences go way beyond that. It also matters per ‘field’ so to speak. When it comes to rights and respect it is very clear there should be no difference. That simply overrides being a male or female. But when it concerns the more stereotypical differences it becomes less clear. I tend to catch myself at being inconsistent in it as well. I can look at stereotypes as unwanted and wanted both. As if I ‘use and classify’ them depending on what suits me best and not on what is accepted as best by the general public. This is caused by feeling some stereotypes as desirable actually and others like repulsive. It is linked with feelings and what they do with me and with certain moments and persons causing these feelings.

Some of the stereotypes we all know:

Women as the ever sentimental, emotional, helpless, impenetrable, overly concerned and unpredictable persons with a mind that looks like a loud, buzzing, damaged beehive. Or women as sweet, innocent, caring, soft minded souls. Femme fatale, bitch and muse also fit into stereotypical descriptions.

Men being distant, cold, imperturbable, powerful, emotionless and competitive macho’s who seem to not care about what the world thinks of them. Or men being heroes who fight for their girls, no matter what threat comes at them.  A worldly Don Juan or ruthless villain. A playful Robin Hood we forgive all his sins. Plenty male stereotypes as well.

Of course, we are all smart enough to know this hardly ever applies to all men and women and most certainly also not all features of it, but we do laugh at jokes that are made on them. This at least suggests we recognise elements in others and ourselves. I think it is too easy to explain such jokes as a kind of arrogant, belittling view only. There seems to be a truth in it, even if we try to escape it maybe or prefer to deny it. Also, we like it better to characterise other persons with certain stereotypical ‘treats’, to upgrade ourselves. The ‘I am not like that attitude’ is a powerful way of distinction. Fact is, I think, we all are like that, at certain moments, not necessarily seen by others, suppressed even often, not wanting to show it, but feeling it inside, when we enter a space where our being male or female is called upon in a specific way.

And yes I know also females can be competitive and males can be buzzing idiots too, so my stereotypes are not 100 percent watertight, but I think males and females do have their own specialties in this anyhow.

The inconsistency I mentioned is when I actually am ok with feeling like the somewhat helpless creature for instance. To have an ‘excuse’, a reason, to ask or even beg for support from a male. To be the receiving one, the emotional and vulnerable one, to want and need help from a male, can be ultimately comforting actually. Not as an act of weakness, also no shame or embarrassment, but to feel how safety feels, to feel how protection feels and to feel how sweet it is to have a place where you can show imperfections and know they will be reassured. Like being too concerned, too nervous, too insecure, etc. To not always have to help myself, but also feel the care of someone I could see as my strong hero. This dynamic of being strong yet also vulnerable, being independent and dependent, control and no control, is linked with a need to escape from the idea I never should embrace parts of me that could be seen or are seen as stereotypically female. But it is terribly inconsistent with other states of minds I also can have. The moments in which I feel like needing to help myself more. At such moments asking help from a man (or just anyone) feels like being too much the dependent woman, not fitting into our modern society. At such moments I will feel like solving all my own issues and take care of myself. It comes and goes, and also depends on the actual availability of someone else and how strong I feel a connection with that someone else.

On the other hand I imagine men will have the same kind of feelings when they are allowed to show a side of themselves which can be called stereotypical. I can imagine it must feel nice for a man to feel a bit the hero, the firm and steadfast anchor someone can rely on. Or to be the ‘old-fashioned’ gentleman with flowers and presents.

It of course has to stay realistic, genuine and natural. As soon as it becomes a staged act, a theatre more than being driven by a feeling inside, it all will become just that stereotypical and somewhat silly situation we do not really like. And it most certainly only applies to the pleasant parts of stereotypical elements I feel inconsistent with. I cannot imagine any fun in becoming a femme fatale or bitch and when I would be male, to become a ruthless macho also would not generate true joy.

It probably explains why we almost all like certain movies in which the nicer parts of stereotypical behaviours are being highlighted. Uber romantic and dramatic, knowing it will be hard to totally have that kind of experience for real with someone, but also believing it maybe could be possible if we allow ourselves to step away from the roles we are expected to play. That it is ok to sometimes just be what others would feel like not the right thing to be. It maybe even explains why my husband puts the garbage outside, and not me  . . .  where there is not a single valid reason I should or could not do so.

And it certainly explains the sexual connections people make, when into dominance and submission. That is a conscious choice, yet also cannot be seen apart from a need and feeling inside. To have to feel like the one in control or to have to feel like the one giving away control. Maybe this willingly and knowingly embracing stereotypical ‘roles’ is actually being not stereotypical, because it often goes against the general rules of engagement. Especially in times where it is not done so much anymore to interact in a way that puts a woman (or anyone) on her knees literally and much more.

We live in a time where many jokes and stereotypical expressions and acts are not done anymore, even if harmless or just showing an element of truth. All is being weighed at the scales of respect. And respect has become a kind of ‘though shall never dare to joke on humans and their behaviours’ and ‘though shall not act in a way society has adopted as being out of fashion’. There  might be one human somewhere who could feel insulted after all. Sure, there are good jokes and bad jokes, acceptable and ridiculous acts, I know, but to bury also the good ones because of some bad ones . . . .  hmm, not okay.

It makes navigating in society more and more like walking on eggs. Plus that every little imperfection or not so well chosen word or image, will be blown up into whatever media, making an incident out of nothing. This only encourages people to go more and more into hiding things, not being honest, or play a role for the sake of being approved. Not good. And it worries me. It is ok to be sensitive and have critical views. It is not ok to make a circus of it and feed the hungry minds of gossip loving idiots. Expose, humiliation, spectacle and destruction have become entertainment. Media have become their own stereotype one could say. The greedy machines of attention seeking drama kings and drama queens who forget what really matters. Information versus entertaining.

And the point is?

I just want to be and feel free of being expected to perform a role or something. To have to fit in to a standard. To  have to fit in to a certain moral. To have to fit in to society with its suffocating rules. To have to fit in to groups with conformity and one voice only. Etc etc etc. It tires me to see these kind of demands are increasing. I guess the need to escape from that also only will increase in time. It is interesting how stereotypical presences can generate a feeling of attract and reject both. On one hand it delivers a safe space of knowing what to expect. On the other hand that gets sooooo boring you want to escape from it. I guess the ultimate escape is indeed to dare to be stereotypical at your own choice only and not on demand. To stay free in how, when, where and with who. To do it once or twice only or never, is all ok as long as it is a self determined act. Maybe that is the only way to stay free from any kind of fitting in  . . . .  become a bit elusive maybe, not wired in one specific way only. And I suppose there is no difference in that in being a male or female