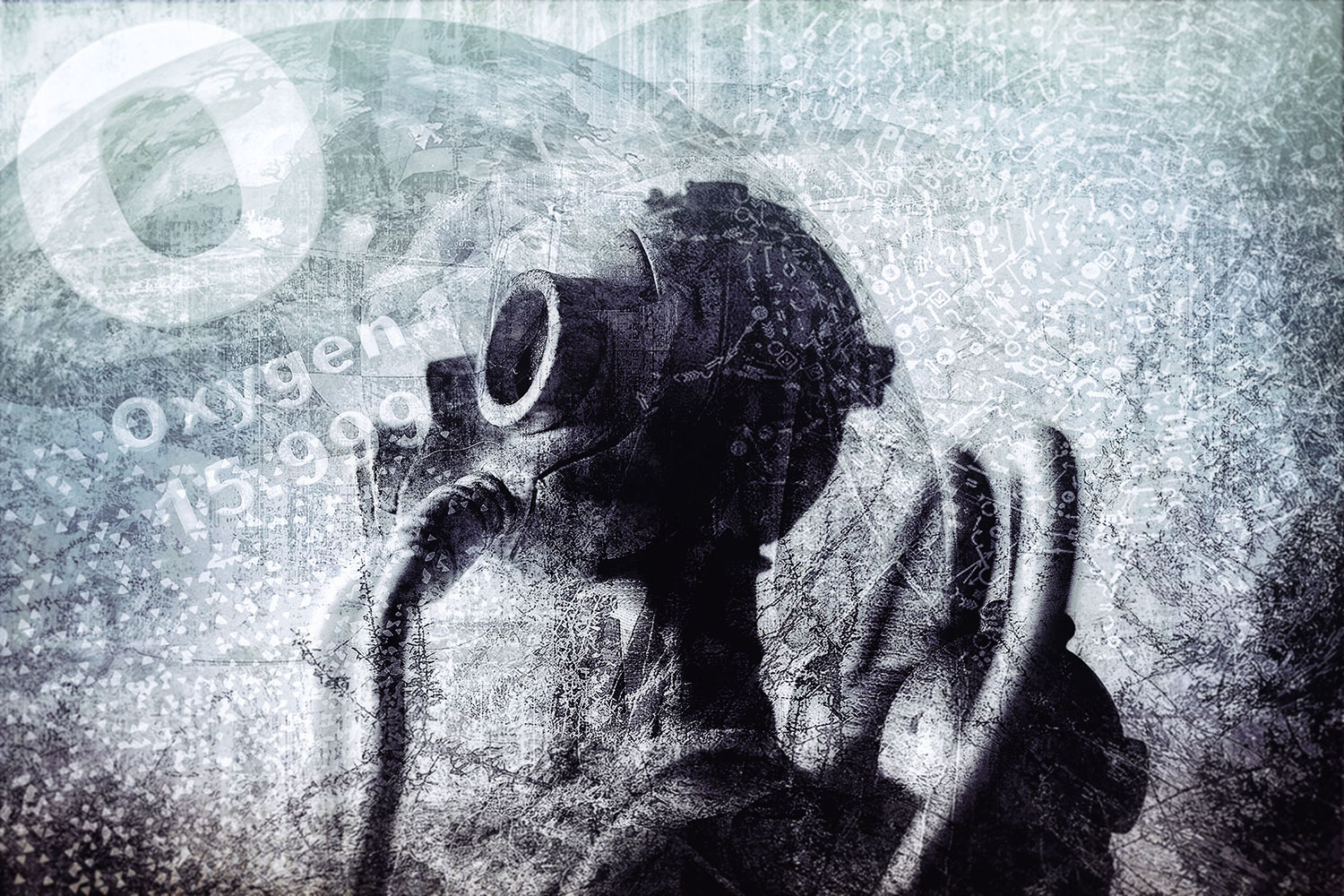 The word ‘entropy’ is known from the three laws of thermodynamics:

The second law is the most interesting one maybe because it can be used for explaining processes outside the field of thermodynamics as well. The Greek root of the word entropy refers to “a turning towards transformation”, and more specifically chaos. The word was coined in 1865 by Rudolph Clausius in analogy to Energie (“energy”), replacing the root of Ancient Greek ἔργον (érgon, “work”) by Ancient Greek τροπή (tropḗ, “transformation”).

So, entropy being a state of chaos can lead to a more broad definition: Entropy is the general trend of the universe towards death and disorder.
— James R. Newman

In that more broad sense entropy is a measure of disorder and in fact it is the default of all our life systems. No matter how organised a system is, there always is a bigger prevalence of disorder in that same system as well, due to the presence of unordered variables and not being able to control the consequences of an increasing entropy in an isolated system, always resulting in a more or less dramatic change.

An isolated system is a ‘nothing in or out’ system in thermodynamics but in the more broad sense I think it is fair to call it a system with a higher receptivity to elements from outside the system due to not being 100 percent closed all the time. Humans for instance are different as system than a machine, but their systems still can be seen as isolated system, just less protected maybe one could say. This means the presence of more variables. More variables increase the entropy process. When you grow older your chance to get ill increases. But with smoking cigarets you help the system to make you ill faster and worse most likely.  Your mind can experience a terrible thing from a distant influence and create a trauma. A country can be attacked by a disaster with disrupting consequences.

Sometimes (more or less) isolated systems are at microscopic levels, but they also exist at macro levels. Your body for instance can be called an isolated system. When your body develops cancer it causes a huge change in your health balance because cells become destructive and infect parts of your body, increasing disordered structures, entropy and chaos in your life. The world economy is an example of a closed financial system at macro level. A major economical decision of one country can heavily affect the economy of another country. Every input of energy/act is followed by a change in all places that are linked with it. This can be a positive or negative effect, depending on what choices are made.

But for every entropy in an isolated system there is eventually the same law/rule:

Let it go by itself, do not control it in any way, or let it be controlled by people without expertise and the system will fall into chaos, or even collapse in a worst case scenario.  Simple example: never cleaning your body means your body soon will become dirty, unhealthy and at risk for diseases. Never cleaning your house has a likewise effect. Your health will decrease, the state of entropy increase. We as humans need to actively resist against a too high level of disorder and chaos to maintain a balance that keeps us physically and mentally healthy enough to prevent entropies on all kinds of levels taking over our lives and society.

A life or system without any chaos, is a non-existing Utopia. A perfect state of entropy suggests the absence of  imperfections. A state of perfection does not exist or only for a very short time in your mind. To want to reach that as permanent state would be exhausting and useless. In fact the existence of chaos is good for us humans to stay aware of what matters and what motivates us to stay creative and curious in surviving as species. The presence of chaos is part of an always changing balance between order and disorder. This change in balance keeps us going, like the wind pushes you forward or backward and never is away for long. No wind, ever, imagine that. The world would be very smelly  . . . and weather systems would act different as well.

For more on this subject please watch the video below. You can activate subtitles. And no I do not understand all that math either and he talks too fast :)

This famous Swiss psychiatrist and psychoanalyst also used a law on entropy in his work. Jung based his view of psycho-dynamics upon two fundamental principles, the principle of equivalence and that of . . . .  yes, entropy

The principle of Equivalence states that if energy is expended in bringing about a certain condition, the amount expended will appear elsewhere in the system. For instance, you recharge your mental and physical wellbeing by taking in good food and putting yourself to sleep.

The principle of Entropy as adapted by Jung to describe personality dynamics states that the distribution of energy in the psyche seeks an equilibrium or balance. For instance, being an overdeveloped extravert puts pressure on you to develop the introverted part of your personality. Jungian psychology states that any one-sided development of a personality creates conflict, tension. An even development of all the parts of a personality creates harmony, relaxation, and contentment.

A state of perfect balance would be one in which no energy is being produced.  If that would happen, the system runs down and stops when all parts of it are in even balance. It sounds as utter perfection, a  perfect level in entropy, but in fact would make humans unhappy because nothing left as goal, nothing to develop anymore, nothing motivating you anymore to be and feel useful. Production of energy requires a certain unbalance, a level of chaos, between the various elements of a system. Like you would lose all need to care for your looks when you would be the only person left at the world, because no one to measure it with or make an effort for. We need a force which stimulates us to act. That force tells us something needs improvement, kicking your ass to go for it and need that to feel ok. We simply feel better in being responsible for something than never having to act on anything and be numb all day. Being numb is a state of being dead in your mind. It bores very fast.  However, since no one is perfect in balance ever, it basically is impossible to reach a perfect level of entropy. It is more a theoretical concept.

I start with a quote from Steven Pinker, a Canadian-American cognitive psychologist, linguist, and science author.

“The … ultimate purpose of life, mind, and human striving: to deploy energy and information to fight back the tide of entropy and carve out refuges of beneficial order.”

Well, it could not be more clear that’s what the whole world is doing right now. The corona crisis generates a huge state of chaos all over the world. The outcome is not clear yet, but we can expect many more people to die than already is the case and the financial systems are experiencing a huge pressure to keep things working despite lockdowns and uncertain markets. On an individual level people wake up in a world they never saw before. All balances they achieved have been brutally attacked by measures and threats on themselves and their loved ones. All of a sudden we look at the world with different eyes. Going outside is a luxury good. Being safe as well. Shopping in a supermarket is a bizarre experience between logic, sense and fear. If I would describe COVID-19 as an energy being injected into our systems, the numbers of illness and deaths it generates back as result is like being in a disaster movie for real. Flatten the curve with social distancing, (partial) lockdowns and quarantines is the force we use as weapon against this monster killer. We seek ways to survive the chaos it causes. We try to decrease the entropy by controlling other elements in our closed system. Humans as catalyst of increasing the danger, means we are in a more or less voluntary state of isolation to prevent the system does not collapse. But in some parts of the world collapsing already partially is a reality. We will survive as world, but the impact on national, local or individual level is big for many. We are in a massive increasing of entropy with our countries as isolated systems being tested to know which limit of chaos they can handle.

I noticed in myself that even watching a movie on TV has become a different experience. To see people walk in groups, touch each other without concern and all kinds of other social acts, made me feel like wanting to shout at them . . . be careful!!!  How odd is that?  As if they are the strange world and we the ones having a standard way of life.

Of course this song has to be in this blog. Muse: The 2nd Law: Isolated system. It speaks for itself but I will decrease your entropy with saving you the annoyance of having to seek the lyrics all by yourself and then blaming me for being your chaos nemesis. The lyrics are very simple, but nothing more needed as far as I am concerned. The visuals are stunning and highly recommended to watch while listening.

To all of you somewhere out there reading this blog

Keep safe, keep sane, keep enjoying your life despite all restrictions and don’t forget . . .  love is the most powerful force on earth. And even in an isolationship you can have a relationship of some kind with love as glue :)  Another great song and great lyrics by Muse fits in here: Resistance.

Speaking for myself: this crisis has a special kind of bonding effect I actually appreciate, both in Second Life and Real Life. But my deepest wish for when this crisis is over, is that the world and its inhabitants will be more humble to the forces of nature in a way that generates more responsible leadership, more awareness and insight and more willingness to not only talk but also act. To see what the world and we really need and what we can miss or should dismiss.

A good read on our present crisis is this as well:  Corona Utopia in three parts

Isolationship picture credits: With thanks to a friend inworld (Tiggy). 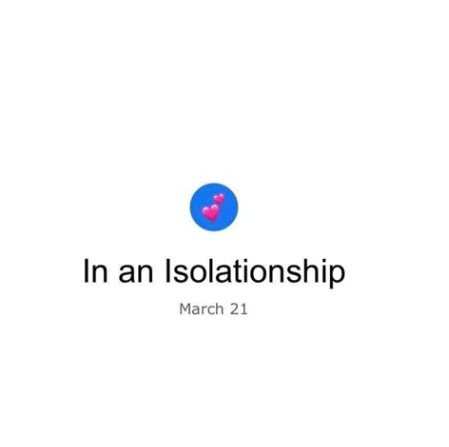