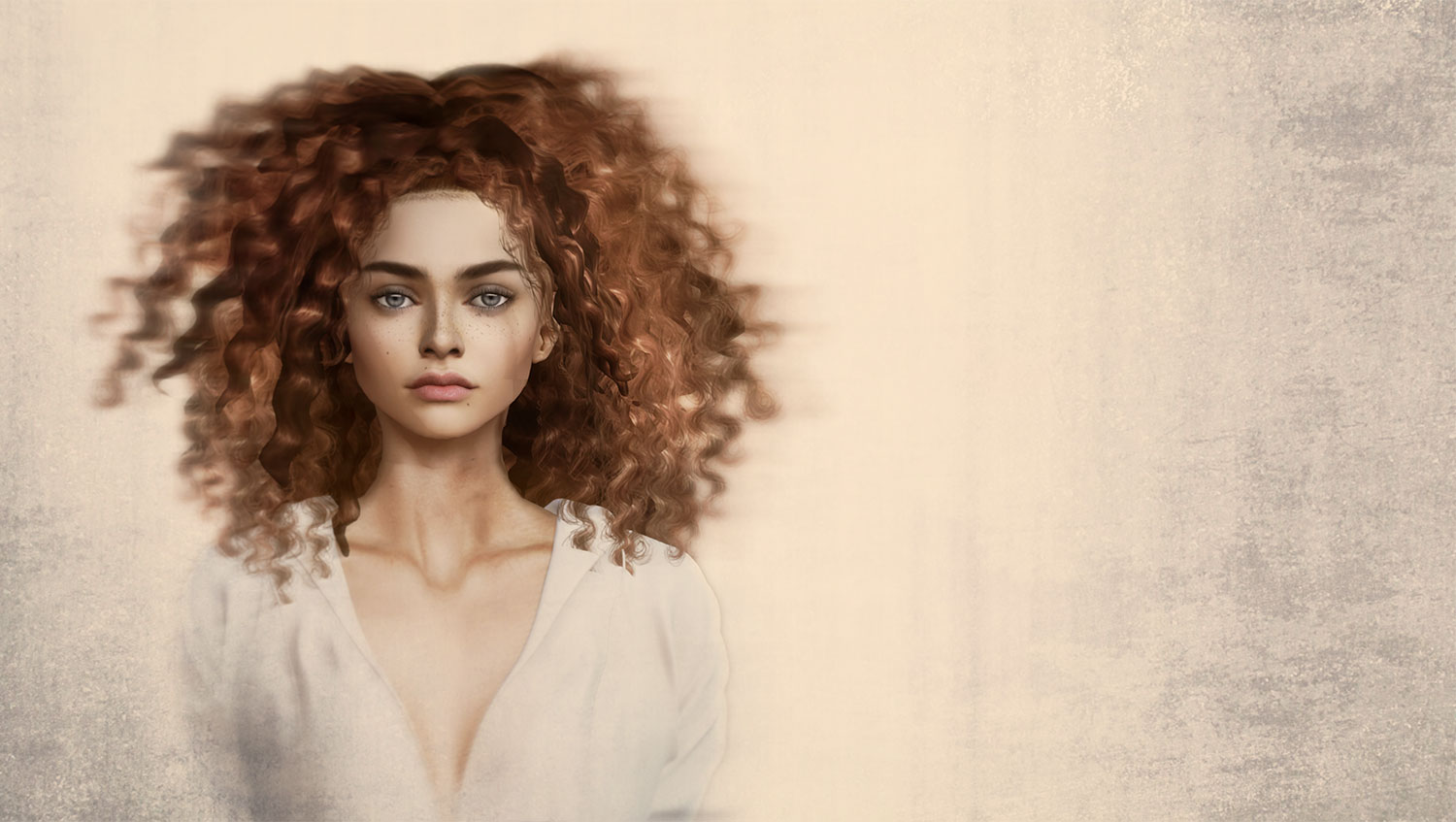 Last week I tested all female Lelutka Evolution heads. I hope to not offend users of one of the heads, but I really was surprised about Duck Face lips still being  incredibly present in this new series of heads. Apparently a majority of women like to have very big lips and especially an oversized upper lip. I always disliked it myself and find it unnatural. The ‘botox gone wrong’ look I always call it. It depends a bit on how they are shaped by default, some can be downsized to more normal proportions, but like we all know with mesh heads, shaping is limited and often results in other unnatural looks when trying to get rid of the default shape. Some skins follow the shape stronger than others as well of course, but it is clear these heads are made for the typical botox look. The only head not like that is Ryn, because more Asian style, but that head did not really work with me either somehow.

I really tried hard to like the big lip heads and tested and shaped endlessly with many skins, but at the end of every test I was disappointed in the results myself. It is very well possible my shaping skills lack, or not having found the skins that work better for my personal taste, but it still is a fact the default shape is what I call duck lips. I am not sure what is behind this precisely. A dating site called OkCupid claimed to have evidence that showing a duck face in your profile pic was generating the most of success and attractiveness in online dating. They said to have done a study on that in 2010, but no one knows HOW that study was done and how representative it really is. For me it is hard to believe to be reliable results, yet it became a hype and when something reaches that status, people just clone themselves into it. All for being ‘attractive’  . . . even if it is based on vague research and an online dating service only. Maybe it was the time people still believed all that was to be found on the internet to be true….

Whatever it is, this form of attractiveness, I don’t get it. Some call it seductive, others innocent (the teenage look), but I do not like either of them as effect. Duck lips I find not seductive at all myself and a too much teenage look feels like trying to be too young for my RL age, apart from not liking to use lips for such an effect. Take a look yourself if not having seen the heads yet. The most duck lipped head by default is Fleur.

In general all head designers tend to make a lot of heads with big lips by the way, not only Lelutka. Also Catwa, Vista, Logo, Genesis Lab, Genus, Akeruka and LAQ do it. Genus less than others in my opinion, except the newer heads. The reason I tested was because a bit done with what was my main look since a year or so. I used Genus Classic and Genus Strong last year. Nice, but I missed a bit the feeling ME in it, if you know what I mean. Plus Genus as brand was (is?) facing (ironic to need that word here) a court issue, so it was possible I would wake up in Second Life without head. All that made me decide to test and be prepared, just in case Linden Lab would take away all heads from our inventories. Imagine that to happen in RL   . . . waking up headless. Would save a lot of mirror  gazing though  . . .

Make up or not

I am not a user of make-up in general. Not in RL and not in SL. I prefer the natural look for myself. This also can maybe be the reason I dislike the many heads with big lips. I think when into spicing up a face with whatever layer of make-up or tattoos you get a total different effect which will do well with the presented heads. Or for a close-up head shot it also looks different than when walking around with it and see the face more on a distance. Fact is as I am not a fashion blogger none whatsoever, let alone a mesh head blogger, so my review is poor and incomplete. I only write to express my surprise on the duck lips being so popular and not being happy with that myself.

Does a choice for a shape and head tell who you are?

Hmm, that’s a bit hard I think, but it does tell something on your preferences and with that maybe on your style and choices on what you find a nice representation of beauty, aesthetics and appearance where it concerns your main look, if you have one. I always wonder how close our own preferences are to the ones we date in SL, if you date. Do the ones you date like your duck lips and your heavy use of make-up and tattoos? And apart from that, but different subject, do they like the also trending giant boobs and booties of women? It all looks so exaggerated to me I sometimes feel like not really fitting into what is hot and fashionable in many ways, but that still won’t make me change my own pretty basic style. Everyone has to do what he or she likes most of course and it is Second Life after all, where you can do all different than you would ever consider to do in RL. But when something is trending it means to me it is fashionable and from that perspective I do not fit in I suppose.

I have no idea and especially not in Second Life where realistic and unrealistic are mixed existences. What I do know is most people like to do selfies. I am not  free of that totally either, even if I mostly make pictures solely for a blog I write and not to present a selfie in the first place. But yes, many like to look at their own heads apparently as work of art :)  There has been done a study in RL on what selfies say about you however, but also inconclusive because not free from flaws in how the research was done and could be measured in a really good way.

For the study, led by Lin Qiu, Ph.D., at Nanyang Technological University in Singapore, researchers analysed 123 selfies taken from Sina Weibo, a popular Chinese microblogging site similar to Twitter. Each person pictured completed a personality questionnaire. Each selfie was categorised based on 13 cues. For example if someone yes or no was  making a duck face, if someone yes or no was looking at the camera, camera position, photoshop editing yes or no, body visual yes or no,  yes or no presenting a private location, emotional expression, etc etc  Then, 107 Chinese students were asked to look at the selfies to evaluate the owners’ personalities. This resulted in seeing several connections between certain selfie styles and personality traits:

But the results and conclusions hardly can be called proof because most of the students did NOT score on most of these correlations. For example, they incorrectly assumed pressed lips predicted extraversion and openness and being alone in a photo meant the person was neurotic. The only accurate observation they made was that positive emotion could be linked to be open for new experiences. And since most people will do a selfie with a positive look on their face, nothing much distinguishing  and conclusive could be said on it for real, since selfies are posed faces and not a true representation necessarily. It comes down to what you think yourself when seeing duck lips. The ones using it for dating find it hot; others may find it proof of being a sheep, researchers may look for emotionally unstable tendencies, or you are just a looney who wanted to be funny for some reason. My personal opinion on it: ugly and counterproductive in effect :)

And what about your head Yoon?

Hmm yes. Well, I decided to stop with testing. Also because that’s very time consuming when you do it like I do, but mainly because I had a far more simple solution to feel more ME again. I decided to go back to my former look in SL I always felt ok with actually. My change to Genus was because wanting a new look for my own personal reason and because the skin I used on my Maitreya body has some less well done parts I found it a good idea back then. So what you see on the picture is an old Akeruka head (LARA), not even in the shop anymore and an old Bold and Beauty skin as well (ANAIS, also not for sale anymore). I take the less well done parts on the body skin for granted in exchange for feeling more me again. And in case I might lose the Genus head indeed I at least won’t be headless. I shaped the head myself and the lips are about the max size I find appropriate and acceptable enough to not be a duck face. Maybe you see it different and call me a duck face even so. All is possible, but I don’t talk like a duck and also don’t sound like a duck :P I will call myself RETRO, also because I don’t use BOM and am 2 updates behind already with the Maitreya body too . Yet I am super hot of course ^^

The study itself can be found here:

A critical review on the study by the BPS (British Psychological Society) can be found here:

*ADDENDUM:
Just today I received the news that all issues in court are solved and that Genus is back into business. So I even could use those heads again in whatever future :)